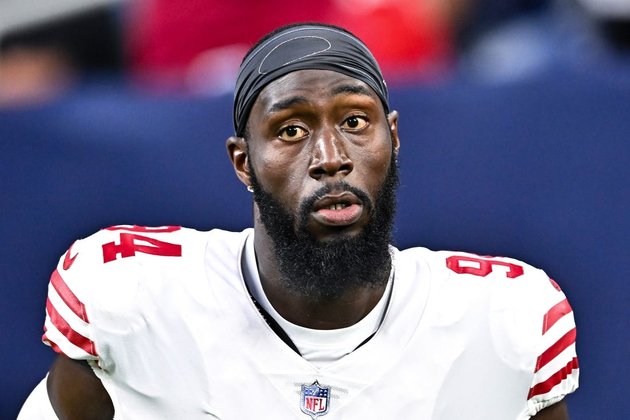 Omenihu, 25, was booked at the Santa Clara County jail and released after posting bail. He also was served with a restraining order.

San Jose Police officers were summoned to Omenihu's home on Monday afternoon for a report of domestic violence. A woman then told the responding officers that Omenihu is her boyfriend, and that he "pushed her to the ground during an argument."

The woman complained of arm pain, however officers stated in the police release that they "did not observe any visible physical injuries." She declined medical attention.

"We are aware of the matter involving Charles Omenihu and are in the process of gathering further information," the 49ers said in a statement on Tuesday morning.

The second-seeded 49ers are preparing to play the top-seeded Eagles in Philadelphia in the NFC Championship Game on Sunday.

Omenihu has recorded career-best totals in tackles (20) and sacks (4.5) in 17 games (three starts) this season. He also had two sacks and a forced fumble in San Francisco's 41-23 win over the Seattle Seahawks in the wild-card round.

Omenihu has totaled 67 tackles, 11.5 sacks and three forced fumbles in 61 career games (10 starts) with the Houston Texans and 49ers. He was selected by the Texans in the fifth round of the 2019 NFL Draft.

DALLAS, Texas: Oil and gas pipeline operators are preparing to stockpile equipment following severe weather forecasts for the next few ...

TikTok CEO to appear before US Congress to discuss security concerns

WASHINGTON D.C.: As US lawmakers investigate the Chinese-owned video-sharing app TikTok, its Chief Executive, Shou Zi Chew, has confirmed that ...

TEHRAN, Iran: A gunman this week stormed the Azerbaijan Embassy in the Iranian capital, Tehran, and killed its security chief ...

Concerns about recession in Germany after economy shrinks in Q4

FRANKFURT, Germany: Data released this week showed that the German economy unexpectedly shrank in the fourth quarter of 2022, indicating ...

TOKYO, Japan: In a statement posted on the website of the Chinese Embassy in Tokyo, Beijing announced that it will ...