No. 2 Texas looks to rebound vs. Arkansas-Pine Bluff 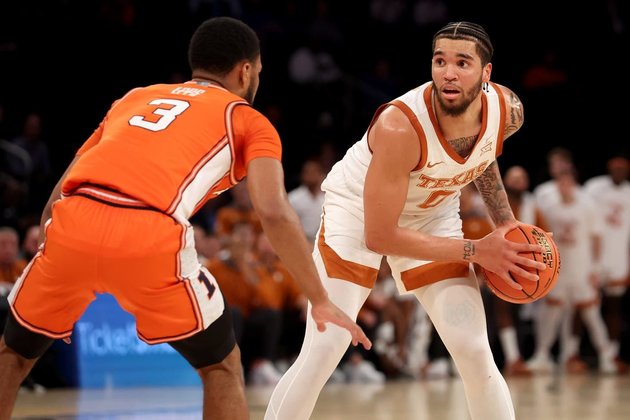 No. 2 Texas will attempt to get back on track after its first loss of the year when it opposes Arkansas-Pine Bluff on Saturday afternoon in Austin, Texas.

The Longhorns (6-1) are sure to fall from their highest ranking since 2010 after an 85-78 overtime loss to No. 17 Illinois on Tuesday in the Jimmy V Classic in New York. Texas dominated the game for large stretches, especially in the second half when it led by as many as 10 points, before the Illini caught fire down the stretch to tie it a 68.

Illinois then built a seven-point advantage in overtime and the Longhorns never saw the front again. Timmy Allen led Texas with a season-high 21 points, and Tyrese Hunter scored 10.

"We wish we would have played better in the basketball game," Texas coach Chris Beard said. "We've had a great start to the season, and we've done a good job learning from victory ever since this summer. Now we've got to try to learn from a night where we didn't win on the scoreboard."

The Longhorns recorded a season high 20 assists on 29 field goals. Texas posted a 38-28 advantage in points in the paint and a 33-25 margin in bench scoring -- but that was not enough.

"The overtime momentum seemed to shift because we made too many mistakes," Allen said. "Obviously, as veteran players, you've got to be better -- all of us on the ground. You know we could have won it in regulation, but we just let it slip away."

Texas has two quality wins, both at home, against then-No. 2 Gonzaga and then-No. 7 Creighton. The Longhorns aren't scheduled to play a true road game until they visit Oklahoma on Dec. 31.

Arkansas-Pine Bluff (3-7) heads into Austin on the heels of a 59-41 victory at home over Arkansas Baptist, an NAIA program, on Dec. 3. The win was the Golden Lions' second in the past three outings, but UAPB is 0-7 this season against Division I competition.

Doss knows he could have played better. The Golden Lions led by 16 at the half but didn't really build on the advantage.

"I will be focused on stopping turning over the ball," Doss said. "I'm doing that too much, and that's on me."

"I think we did a bad job on the glass, and we need to get better with that," Arkansas-Pine Bluff coach Solomon Bozeman said. "We had really good defense and our guys did a good job supporting each other."

Arkansas-Pine Bluff already has lost to TCU and Oklahoma this year, and it will take a mighty effort to go 1-2 against teams from the Big 12 Conference.

The programs have played just once previously, with Texas earning a 63-31 home victory last December.

WASHINGTON D.C.: US lawmakers have called on the Department of Energy to release documents detailing attempts by Russian hackers to ...