Since the official launch of Virtuoso Bass back in the fall of 2020, a lot has happened. The pandemic held up plenty of editorial calendars and the legendary Bunny Brunel waited for just the right time to put out the second issue of the much-anticipated lifestyle magazine for iconic jazz bassists. Virtuoso Bass seized the moment to retain Ty-Ron Mayes (America's Next Top Model, Damon John, Agenda) and NY photographer Udo Spreitzenbarth (Catherine Zeta-Jones, John Legend) to create the fashion/lifestyle editorial of Ron Carter titled, "Ode to the Upright." 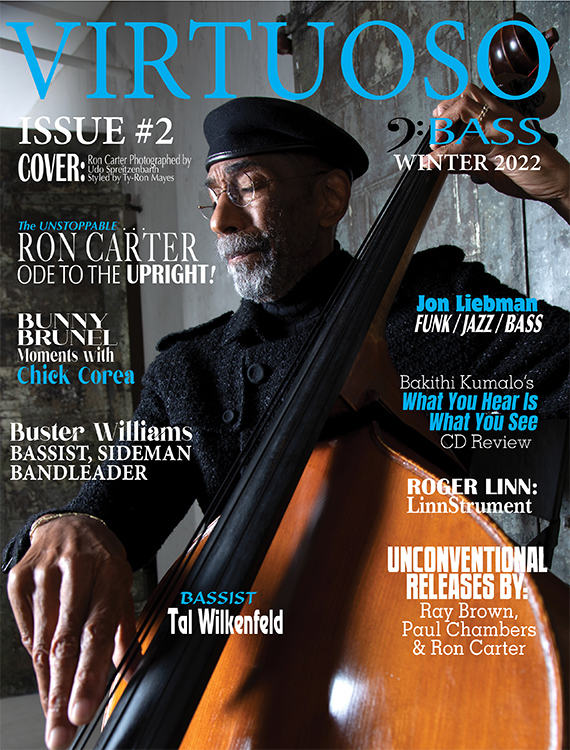 "A lot has happened since the launch of the first issue back in 2020. I was all geared up to feature some amazing bass talent. Sadly, when covid came, it destroyed a lot of people's plans and Virtuoso Bass was not immune. But we're glad to be back with a brand new issue, featuring phenomenal bass players. Being a bassist is not just about supporting the band, even though that is definitely the main purpose, but there is a level a player reaches when suddenly people sit up and take notice. My vision is still to put a spotlight on bass players who've made a real impact, are at the top of their game, and even created their own sound and style. Ron Carter is one of those bassists. Buster Williams, another great bassist who plays the upright is such a great musician and another player with an impressive number of performances. And we will always include women bass players just like in our first issue when we profiled female bassist Carol Kaye. This issue we chose another talented woman, Australian-born bassist Tal Wilkenfeld." -Bunny Brunel

Ron Carter is highly featured throughout the issue with his recent release of the PBS documentary, Ron Carter: Finding the Right Notes. The timing couldn't have been better. Virtuoso Bass was able to feature a review.

"The most recorded bassist in history tells his story in this intensely moving documentary. This detailed biography gives us an insight into the life of the revered jazz icon."-Virtuoso Bass 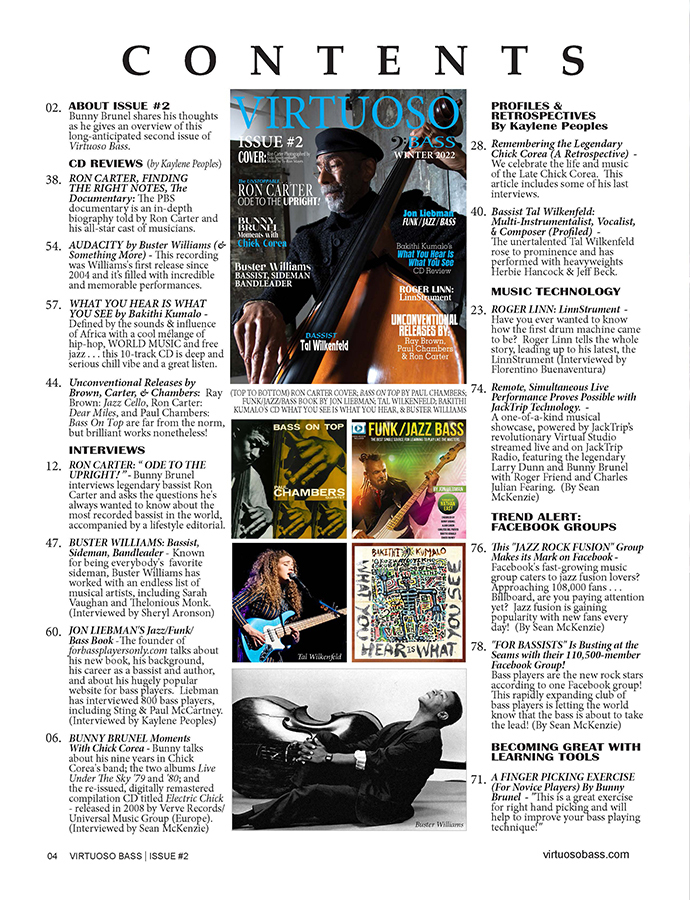 "Working with Bunny Brunel to help him realize his vision for Virtuoso Bass is not only exciting, but it's a real education. To be able to co-curate such a beautiful periodical and learn about jazz bass on such a deep level is compelling. I met Ron Carter after seeing him perform at the Catalina Jazz Club in Los Angeles back in 2015. Virtuoso Bass has given me the opportunity to experience this legend again. After exploring Carter's music, watching his documentary, and poring over the images to make the final selection for his lifestyle editorial, I am unbelievably honored to be a part of this incredible history in the making! -Kaylene Peoples, Executive Editor

"What an honor it was to add a little extra sparkle to double bassist Ron Carter's star. The maestro of jazz has got swag all day long and I wanted to show that he is still 'mad fly.' The moment I saw that woven, wool military-style suit with black iridescent flecks intricately peppered through the ensemble by Cillian Atelier, paired with that classic beret, I knew our cover would not only capture the look of the moment, but would also successfully define the tone of Virtuoso Bass, exemplifying the strength of this multi-Grammy Award-winning musical soldier. Carter's editorial also highlights his "ageless" spirit that has experienced a life that still has so much to offer." -Ty-Ron Mayes

Included in this issue is Bakithi Kumalo's review of his CD "What You Hear Is What You See" and Buster Williams's (& Something More) review of "Audacity. Journalist Sheryl Aronson interviews the revered bassist who has performed with a range of musicians including Thelonious Monk, Sonny Stitt, and Sarah Vaughan.

"You create something that is unconstrained; it doesn't come from talking about this is what we're going to create. You just start playing, you're enjoying each other. Another thing is repertoire doesn't necessarily change so drastically. You're playing the same tunes, night after night, and because of your creative being, you strive to do something different. And you're developing, you're growing. So, the music develops and grows. What happened with Herbie [Hancock] The Sextet, is we were willing to let the music grow to the point where the music was the defining determinant of our actions. Rather than going on the bandstand and saying, 'okay, this is what we're going to play tonight.' No, the music told us what we were going to play, and how it's going to happen. This can't happen without trust. And trust like that can't really happen unless you've built a body that the collective reality of each one of you surrenders to. This collective body is what is determining things. This collective body belongs to the music. It wasn't about any one of us, it was about the trust that we had." -Buster Williams, Virtuoso Bass

Jon Liebman is the founder of the popular website Forbassplayersonly.com

and has interviewed 800 bass players including Sting, Paul McCartney, etc. After publishing nine very successful instructional books for bass players, he recently put out Funk/Jazz/Bass endorsed by Bunny Brunel, Alain Caron, Carlitos Del Puerto, Bakithi Kumalo, and Chuck Rainey with the Foreword by Nathan East. Funk/Jazz/Bass is Liebman's first non-instructional book that "illustrates the numerous possibilities of playing funk/jazz bass by analyzing how the bass greats have done it." In Liebman's interview, he talks about his background as a bassist, and what inspired his website and his latest book. "Funk/Jazz/Bass is 'a play in the style of' book. And I tried to get a good cross-section of some of my bass heroes. [There is] Richard Bona, Bryan Bromberg, Meshell Ndegeocello, there are 30 altogether." -Jon Liebman, Virtuoso Bass 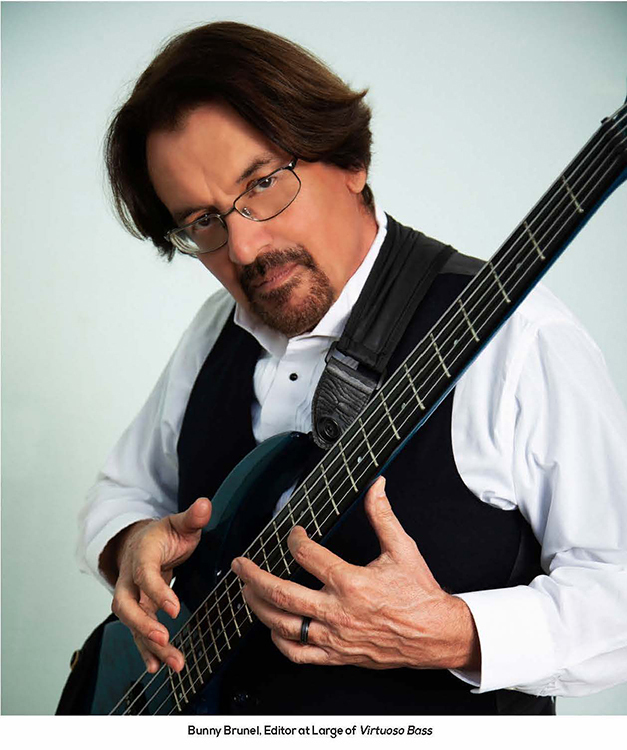 "Remembering Chick Corea" is a retrospective on the legendary keyboardist's life. Anybody who knows anything about Bunny Brunel, knows his career was launched as a result of his nine years playing with Corea. It was Bunny's desire to pay tribute to the brilliant fusion pianist who changed his life. Inside issue 2, Virtuoso Bass delves deep, profiling the 23-time Grammy-winning pianist and featuring highlights from Corea's most recent interviews, his important releases, and his wildly prolific career. And in "Bunny Brunel Moments," Bunny talks candidly about his time with the keyboard giant whose music will always live on.

Virtuoso Bass investigates two fast-growing Facebook Groups, For Bassists and Jazz Rock Fusion. And if you ever wanted to know who invented the drum machine, interviewed this issue is Roger Linn who tells the backstory that leads up to his latest technology, the LinnStrument.

Bunny Brunel is the Editor at Large of the premier lifestyle magazine for bass players. Launched in 2020, the very first issue featured Bunny Brunel on the cover, Kyle Eastwood (back cover), Eddie Gomez, Carol Kaye, Larry Dunn, Stanley Clarke, and AMPEG SVT. Bunny Brunel talks about his mission for the magazine. "I want to talk about great players, and some of these guys, nobody ever mentions. If the media is going to publicize bass players, they should focus their attention on those great players who are responsible for what followed after,"-Bunny Brunel.

To purchase the print version of Virtuoso Bass Issue 2, visit Amazon.com. To get the digital copy, visit virtusosbass.com. For an exclusive autographed copy of Virtuoso Bass magazine by Bunny Brunel, please visit bunnybrunel.com/bunnys-store

Original Source of the original story >> Editor at Large Bunny Brunel Features the Legendary Ron Carter on the Cover of VIRTUOSO BASS, Issue 2.

This content is published on behalf of the above source. Please contact them directly for any concern related to the above.