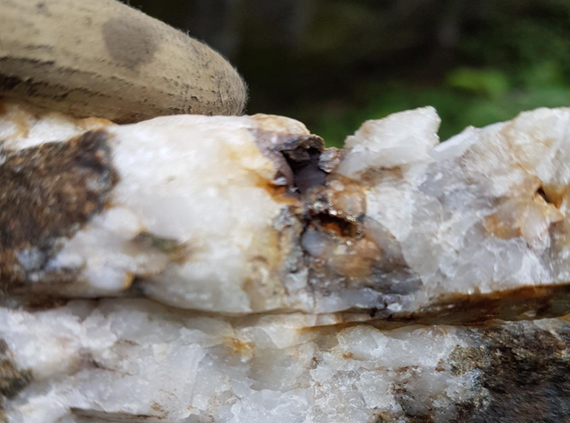 The 2022 prospecting program was focused within the east region of the East Golden Promise Property. A total of 22 rock samples were collected during the program. Samples were collected from bedrock exposures, loose rock fragments near bedrock and float boulders. Eight rock samples returned anomalous gold values in the 0.010 to 0.084 parts per million (ppm or grams per tonne) range.

Rock samples from bedrock and loose rock near bedrock from a small area less than 10 square meters returned the highest gold values. Sample 431804 from bedrock of meta-sandstone with quartz veins and sulfide mineralization returned 0.044 ppm gold. Samples 431806 and 431807 from loose rock (meta-sandstone with quartz veins and sulfide mineralization) near bedrock returned gold values of 0.073 ppm gold and 0.084 ppm gold. The 2022 rock samples from the East Golden Promise Property were analysed for gold by ALS Canada Ltd. by Fire Assay - AAS. ALS Canada Ltd. is independent of Great Atlantic.

Great Atlantic collected soil samples in this area during 2022 of which the analytical results are pending, the company does anticipating expanding the grid in 2023 if results are also anomalous. 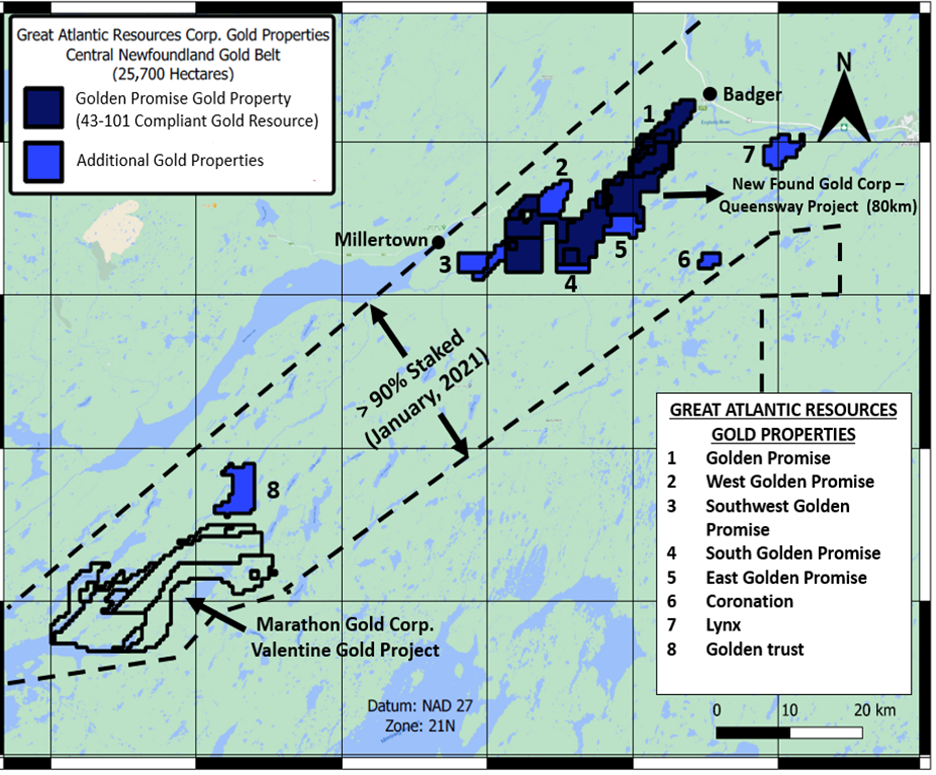 Great Atlantic is planning further focused work at the East Golden Promise Property during 2023, being focused within the east region of the property with the area of samples 431804, 431806 and 431807 being a priority area for additional work. Additional soil and rock geochemical sampling are planned. Pending results of this work, trenching is planned. 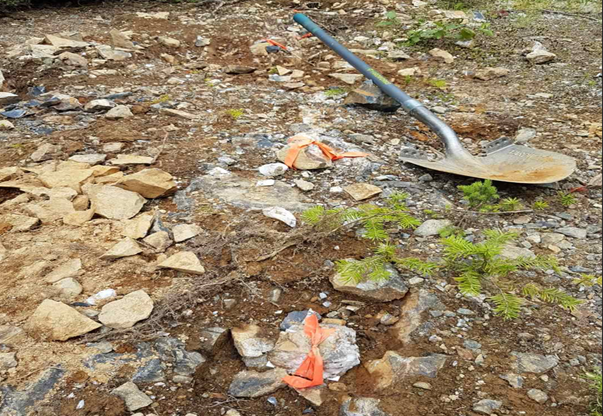 Access to the East Golden Promise Property is excellent with a gravel road transecting the property. The property covers an area of approximately 1,125 hectares and is 100% owned by the Great Atlantic.

David Martin, P.Geo. (New Brunswick and Newfoundland and Labrador), a Qualified Person as defined by NI 43-101 and VP Exploration for Great Atlantic, is responsible for the technical information contained in this News Release.

On Behalf of the board of directors

About Great Atlantic Resources Corp.: Great Atlantic Resources Corp. is a Canadian exploration company focused on the discovery and development of mineral assets in the resource-rich and sovereign risk-free realm of Atlantic Canada, one of the number one mining regions of the world. Great Atlantic is currently surging forward building the company utilizing a Project Generation model, with a special focus on the most critical elements on the planet that are prominent in Atlantic Canada, Gold, Copper, Zinc, Nickel, Cobalt, Antimony and Tungsten. 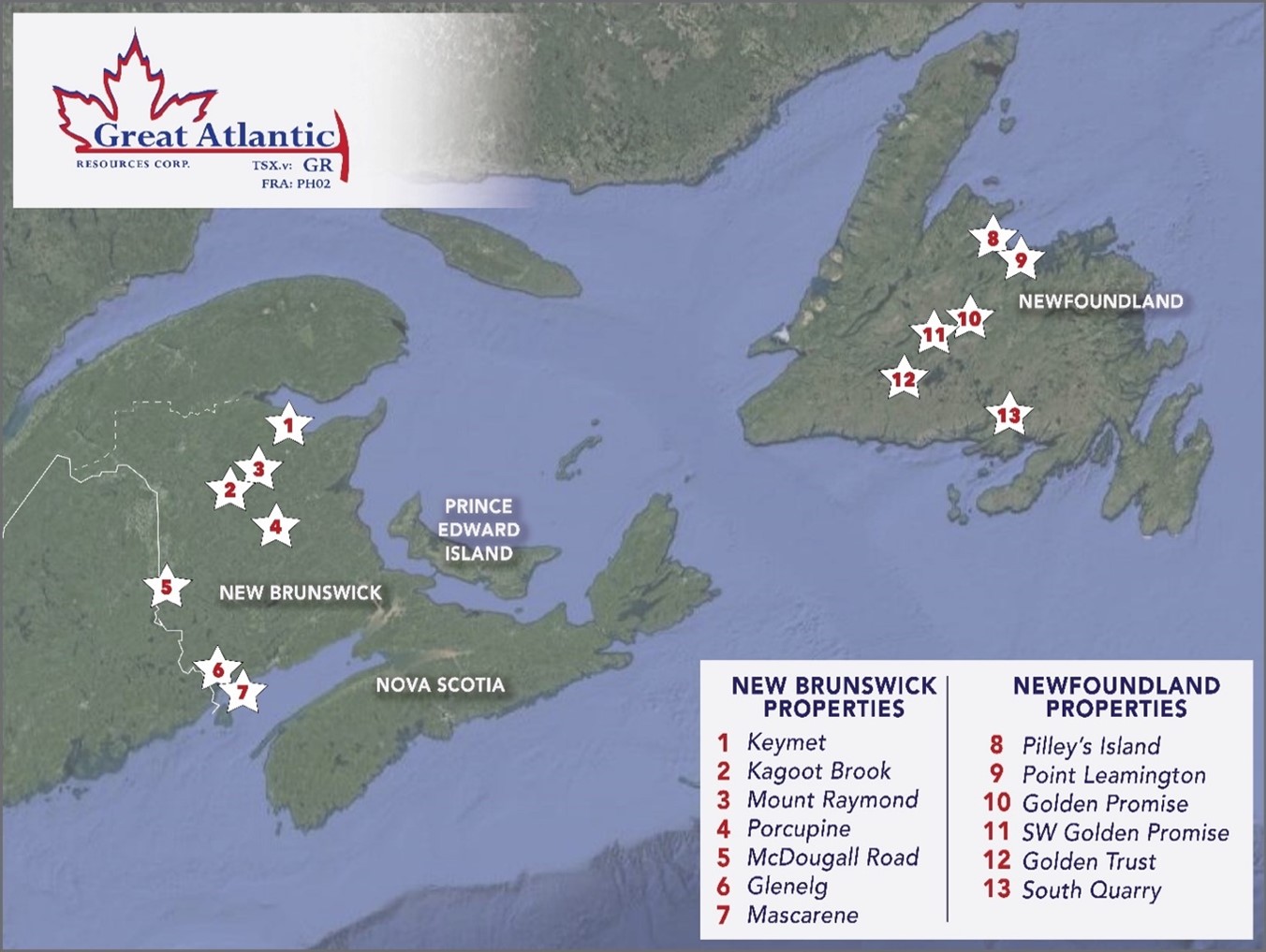 Republicans in Congress to impeach border official due to migrants

WASHINGTON D.C.: In a sign of future political battles over record numbers of illegal crossings under Democratic President Joe Biden, ...

MOSCOW, Russia: Russian state-run TASS news agency has reported that a US woman was detained and fined by a Russian ...

ISLAMABAD, Pakistan - Former President General (retd) Pervez Musharraf died in a Dubai hospital on Sunday at the age of ...

Up to 2,000 Israelis to be housed in new town on Gaza border

JERUSALEM - Israel on Sunday announced plans to build a new town on the Gaza border .The town, temporarily named ...

US cancels over 1,800 flights due to ice storm

CHICAGO, Illinois: After an ice storm ravaged states from Texas to West Virginia, this week, airlines canceled over 1,800 flights ...

Fed fails to cool economy as US sees 517,000 jobs created in January

WASHINGTON D.C.: Despite the efforts of the Federal Reserve Bank to cool the job market to help curb record-high inflation, ...

102,000 job firings in US high tech in December, according to report

WASHINGTON D.C.: A report released this week detailed how, in January, layoffs in the US reached a more than two-year ...

PARIS, France: Following an 18 month controversy that exposed the workings of the global jet market, Airbus and Qatar Airways ...

At US urging, Japan to stop exporting chip technology to China

TOKYO, Japan: Japan is preparing to revise legislation to allow it to restrict the export of advanced semiconductor manufacturing equipment ...