VANCOUVER, BC / ACCESSWIRE / December 7, 2022 / Golden Spike Resources Corp. (CSE:GLDS) ('Golden Spike' or the 'Company') is pleased to announce that it has added two key mineral licences to the existing Gregory River Copper-Gold property (the 'Property'), located in Newfoundland and Labrador, bringing the overall land position to 3,425 hectares.

'We are very excited to announce this important increase to our land position at our 100%-controlled Gregory River Property. These new licences remove two important gaps and further consolidate Golden Spike's land position in this very prospective VMS-belt. The ground covered by the new licences includes several historically explored VMS and vein-style prospects, which greatly enhance the Property's potential for new discoveries. Over the next several weeks the Company will further review the historical work completed over these licences and incorporate this ground into future exploration programs.' 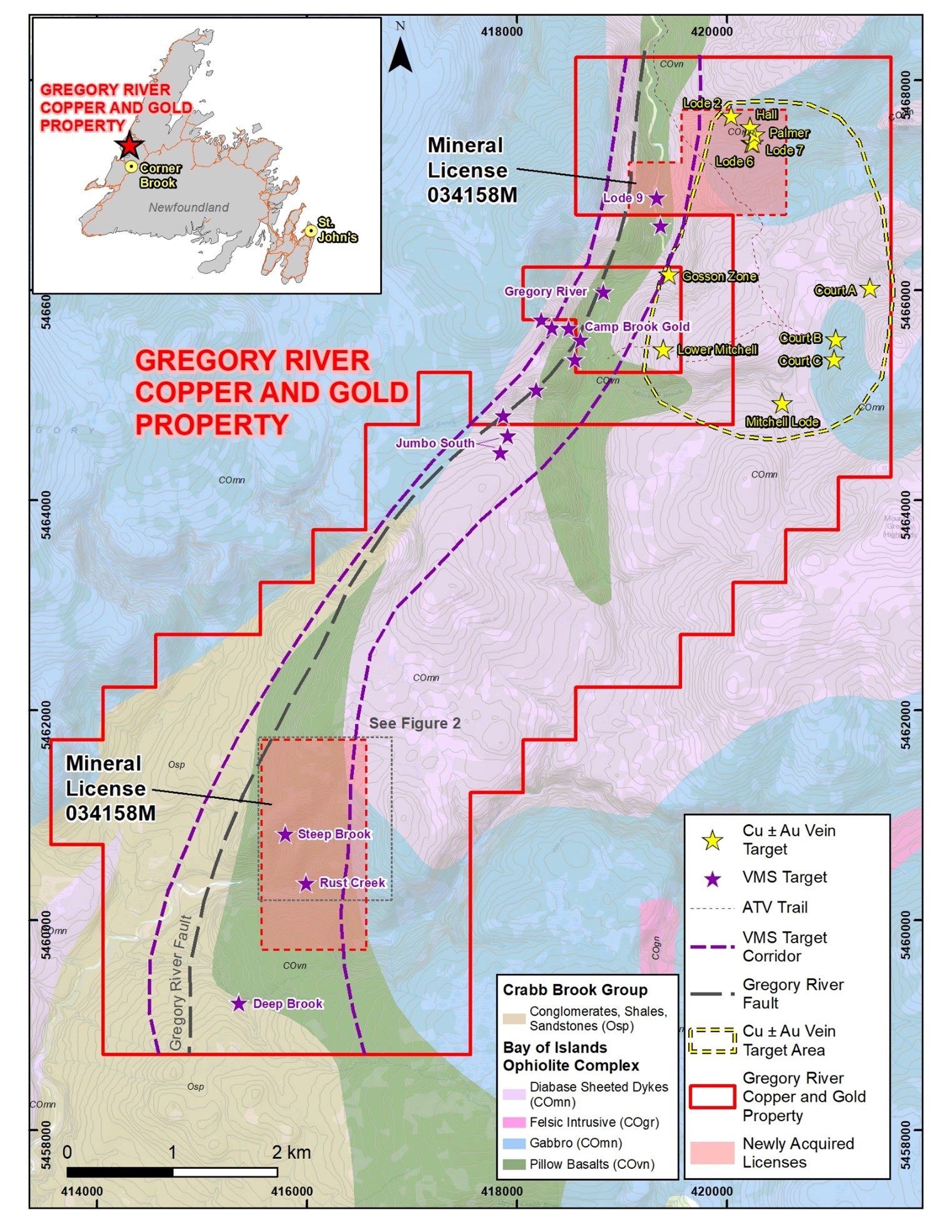 Overview of Gregory River Property and the New Licences

The Property is strategically centered over an approximate 11-kilometer-long stretch of the Gregory River VMS-belt, a north-northeast trending corridor of very prospective ground with potential to host 'Cyprus-type'[1] polymetallic VMS deposits (Figure 1). In addition, the Property hosts a cluster of high-grade, copper ±gold vein structures that occur mainly in the northeast quadrant of the Property (the 'Vein Zone'). The licences are well located in terms of infrastructure, just 42 km north-northwest of the city of Corner Brook, and 53 km west of the city of Deer Lake.

[1] Cyprus-type (also known as mafic-type) volcanogenic massive sulphide ('VMS') deposits are commonly polymetallic, copper-rich, stratabound mineral deposits, hosted by submarine mafic-volcanic rocks that form on, or near the seafloor at mid-ocean ridges and back-arc basins in an extensional tectonic regime.

The addition of the two licences removes some crucial gaps in the land position and adds significant mineral exploration potential to the Property, for both VMS- and vein-style copper and gold mineralization. Historically explored VMS prospects, Steep Brook and Lode 9 are both added to the Property, and in the north, five vein-style prospects, including Palmer, Hall, Lode 6, Lode 7, and Lode 2 are also added to the inventory. Some of the significant newly added prospects are briefly described below:

Steep Brook is an early-stage prospect strategically located in the southern part of the Property (Figure 2) within the Gregory River VMS-belt and in proximity to the Gregory River Fault. The prospect area is underlain by mafic pillowed basalts of the Bay of Islands Complex and is considered to be in a very favourable environment to host Cyprus-type VMS deposits.

Noranda completed a 1,000-metre by 1,500-metre grid of soil samples, which revealed a north-northeast trending, 1,100 metre-long, >100 parts per million ('ppm') copper soil anomaly, with grades as high as 4,700 ppm copper. Gold was not analysed for this survey. The majority of the soil anomaly occurs west of, and topographically higher than the mineralized outcrops in the creek bed, in an area with few outcrops that remains untested by surface trenching or drilling (Figure 2). 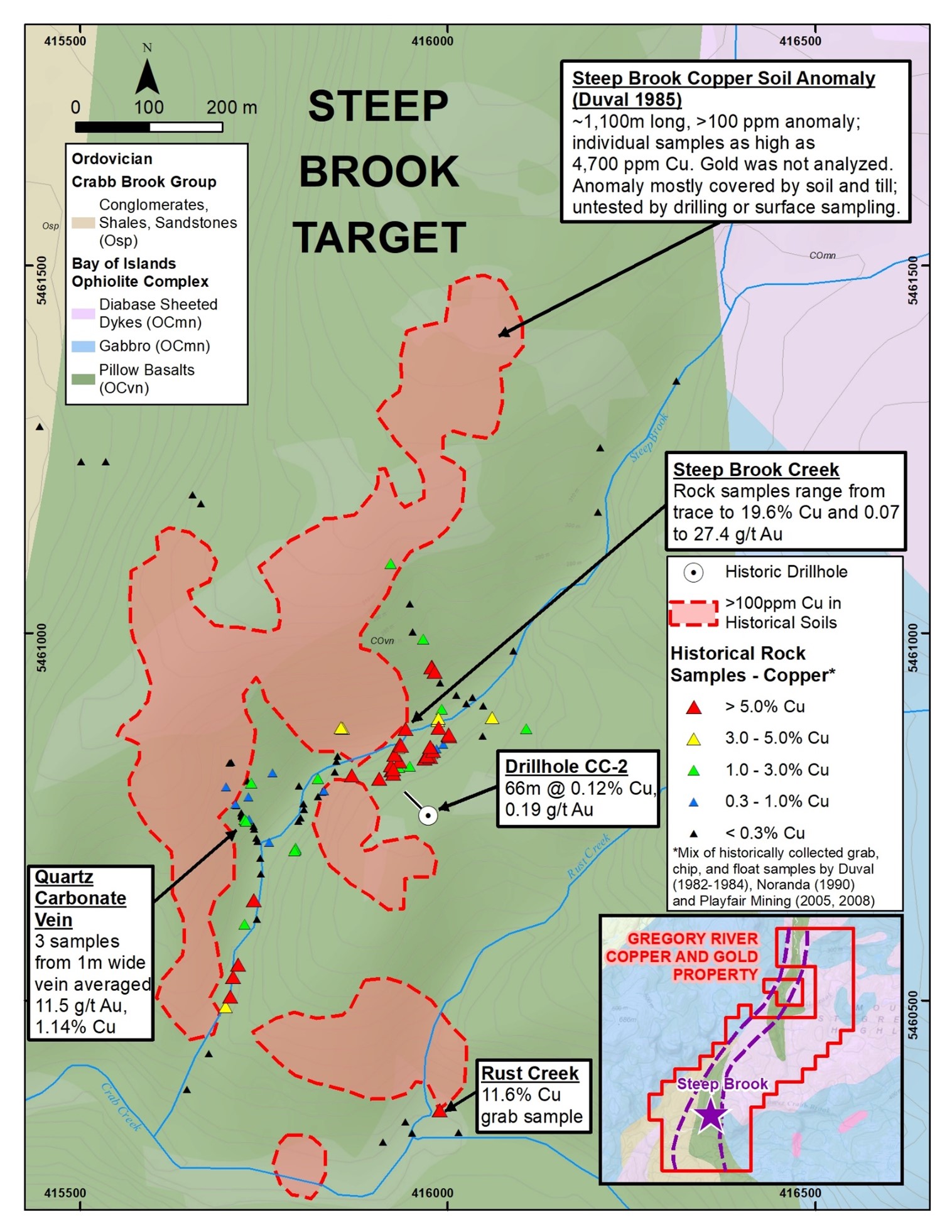 Prior to completing their sampling program, Duval drilled core hole, CC-2 to 137 metres depth, however it was collared too far east to test the depth potential of either the copper soil anomaly or the anomalous surface rock samples. Even so, the hole intersected highly anomalous results including 66 m @ 0.12% copper and 0.19 g/t gold. No follow-up was ever completed over this target area.

The Lode 9 Prospect occurs in the northern portion of the Property and similar to Steep Brook, is in a very favourable lithological and structural environment to host VMS-style mineralization. The area was explored by Noranda in 1991, who completed geological mapping, a soil survey, ground geophysics (magnetics, VLF, HLEM) and four wide-spaced diamond drill holes. The soil survey revealed a 1,200 metre long, north trending, >100 ppm copper soil trend with values as high as 1,000 ppm that remains open to the north. The survey was also assayed for zinc, with the resulting >100 ppm anomalies overlapping with many of the copper soil trends and with individual soil samples as high as 4,000 ppm zinc. Most of these soil anomalies remain untested by drilling.

In 1991 Noranda completed four wide spaced drill holes, one hole at Lode 9, two testing an EM anomaly 380 metres northwest of Lode 9 and one hole testing a narrow copper showing approximately 1,200 meters to the north of Lode 9. Significant assay results were returned from the hole at Lode 9, as follows:

This target has never been followed up with additional drilling.

The drill results shown above for the Steep Brook and Lode 9 prospects are historical in nature, having been reported by previous exploration companies. A qualified person has not done sufficient work to verify or validate these analytical data, as the historic core is no longer available for sampling and therefore these results should not be relied upon. Insufficient drilling has been completed at the Steep Brook and Lode 9 prospects to determine the true widths of the intervals.

The Palmer and Hall veins are part of a cluster of at least eleven, high-grade copper ± gold vein prospects within a 3 by 2.3-kilometre, oval shaped target area (the 'Vein Zone') in the northeastern part of the Property (Figure 1). Based on historical reports, the Palmer and Hall veins both average in the range 2% - 6% copper over widths averaging around 1.5 metres. These veins are among the initial copper vein discoveries in the district back in the 1920's. Palmer was explored through a 90-metre adit (no longer accessible) and several surface trenches, which reportedly traced the west-trending structure for about 150 meters. In addition, drill logs from 11 shallow underground and surface drill holes at Palmer and Hall from 1957-1958 provide an indication of the potential for additional chalcopyrite-pyrite mineralized vein structures that may occur adjacent to the known veins, however analytical results were not included in most of the historical drill logs available to the Company. Other known veins in the vicinity of Hall and Palmer veins include, Lode 2, Lode 6, and Lode 7, which have only seen limited surface sampling and have never been drill tested.

The QP has not yet visited all of the prospects, which are part of these new licences and thus cannot validate the historical databases, nor the results of the historical work presented, however, the QP will complete a site visit at the earliest opportunity. Historical surface sampling programs at many of the prospects was completed by several companies, including majors RioCanex (Rio Tinto) and Noranda, who both reported copper values in similar high-grade ranges to the earlier sampling programs, along with anomalous values of other metals, including gold. It is believed that these companies would have had sampling methodologies and quality control processes in place that were considered industry-standard for that time and therefore the QP feels that it is reasonable to report these surface and drill results as historical and to use them as a guide for future exploration at these prospects.

In the coming weeks the Company will continue to compile the historical exploration information from prospects located within these two new licences and use this data to develop and fine-tune our Phase 2 exploration program (refer to press release dated November 9, 2022, 'Golden Spike Initiates Field Program Over Gregory River Property'.)

The Company has reviewed the results of the 2021 exploration program over the Camping Lake Property in the Red Lake Mining Division, Ontario, which comprised a grid of soil samples over the eastern portion of the property. In general, the analytical results for gold and other elements were low and only a few isolated anomalous soil results were returned. Based on this, and the Company's decision to focus future exploration efforts on the Gregory River Property, the Company has advised Northbound Capital Corp., the vendor of Camping Lake that it has terminated the option agreement.

The scientific and technical information in this news release has been reviewed and approved for disclosure by Mr. Robert Cinits, P.Geo, a director of the Company and a 'Qualified Person' within the meaning of National Instrument 43-101 - Standards of Disclosure for Mineral Projects ('NI 43-101'). To the best of his knowledge, the technical information pertaining to the Property and discussion of it as disclosed in this news release is neither inaccurate nor misleading; however, the technical information presented in this news release comprises paper records maintained by various companies that conducted exploration work on the Property. Details of the sampling methods, security, assaying, and quality control methods used in the generation of this historical technical data are unknown to the Company and the results discussed herein cannot be and have not been verified by Mr. Cinits for the purposes of National Instrument 43-101 and should not be relied upon.

ON BEHALF OF THE BOARD OF DIRECTORS

'Neither the Canadian Securities Exchange (the 'CSE') nor its Regulation Services Provider (as that term is defined in policies of the CSE) accepts responsibility for the adequacy or accuracy of this release.'

Republicans in Congress to impeach border official due to migrants

WASHINGTON D.C.: In a sign of future political battles over record numbers of illegal crossings under Democratic President Joe Biden, ...

MOSCOW, Russia: Russian state-run TASS news agency has reported that a US woman was detained and fined by a Russian ...

ISLAMABAD, Pakistan - Former President General (retd) Pervez Musharraf died in a Dubai hospital on Sunday at the age of ...

Up to 2,000 Israelis to be housed in new town on Gaza border

JERUSALEM - Israel on Sunday announced plans to build a new town on the Gaza border .The town, temporarily named ...

US cancels over 1,800 flights due to ice storm

CHICAGO, Illinois: After an ice storm ravaged states from Texas to West Virginia, this week, airlines canceled over 1,800 flights ...

Fed fails to cool economy as US sees 517,000 jobs created in January

WASHINGTON D.C.: Despite the efforts of the Federal Reserve Bank to cool the job market to help curb record-high inflation, ...

102,000 job firings in US high tech in December, according to report

WASHINGTON D.C.: A report released this week detailed how, in January, layoffs in the US reached a more than two-year ...

PARIS, France: Following an 18 month controversy that exposed the workings of the global jet market, Airbus and Qatar Airways ...

At US urging, Japan to stop exporting chip technology to China

TOKYO, Japan: Japan is preparing to revise legislation to allow it to restrict the export of advanced semiconductor manufacturing equipment ...