VANCOUVER, BC / ACCESSWIRE / November 29, 2022 / Usha Resources Ltd. ('USHA' or the 'Company') (TSXV:USHA) (OTCQB:USHAF) (FSE:JO0), a North American mineral acquisition and exploration company focused on the development of drill-ready battery and precious metal projects, is pleased to announce that it has filed and mailed an information circular (the 'Circular') for an annual general and special meeting of its shareholders which will be held on December 16, 2022 (the 'Meeting'), to, amongst other matters, consider and approve the proposed plan of Arrangement ('Arrangement') between USHA and Formation Metals Inc. ('Formation Metals' or 'FMI'), a wholly-owned subsidiary of USHA, whereby USHA shareholders upon completion of the share exchange described in the Arrangement will receive one (1) share of FMI with respect to every five (5) shares of USHA while continuing to own the same number of USHA common shares as they did on the Share Distribution Record Date (the 'Share Distribution Record Date').

Upon completion of the Arrangement, FMI will hold the Company's interest in the Nicobat Nickel Project and will focus on the advancement of this project. Subject to obtaining the required approvals and completion of the Arrangement, over time it is expected that FMI may add new exploration-stage projects to its portfolio. USHA will retain and focus on the advancement of its exploration projects in the USA, including the Jackpot Lake Lithium Brine Project where the Company will begin drilling next week.

Upon completion of the Arrangement, USHA shareholders will ultimately own shares in two public companies:

Completion of the Arrangement is subject to a number of conditions, including the following conditions which must be met:

The Arrangement cannot be completed until all of the above conditions are met.

Historic exploration work between 1952 and 1972 included over 15,000 metres of drilling, 220 drill holes and numerous bulk samples that identified a non-compliant historic resource of 5.3 Mt grading 0.24% Ni that contained a high-grade zone of approximately 225,000 tons grading 0.87% Ni.

Recent exploration work includes over 4,000 metres of drilling that has confirmed high-grade nickel-copper shoots do exist and are considerably better than previously recorded in the historical drilling, with drillhole A-04-15 intersecting from surface to approximately 63.75 metres a weighted average of 1.05% nickel and 2.18% copper that included an approximately 9.8-metre interval of 1.92% Ni from 53.95 to 63.75 metres.

The targeted feeder conduit measures approximately 305 metres by an average of 60 metres in width to a depth of 245 metres that is potentially open at depth and down-plunge to the north and is composed of cumulate textured olivine gabbro. This magma conduit sits in a larger norite body at the base of the Dobie Gabbro. The historical assessment data records high-grade 'ribs', one of which includes the zone described above. Future work will, therefore, focus on making the historic resource compliant current and expanding on the work completed to assess for other high-grade 'ribs' and the potential high-grade feeder zone as shown in the model below. 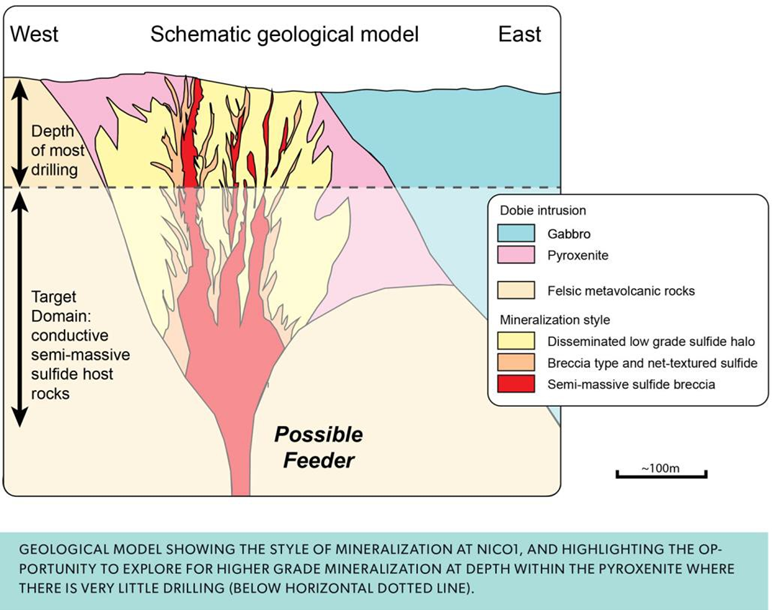 The technical content of this news release has been reviewed and approved by Mr. Andrew Tims, P.Geo., a qualified person as defined by National Instrument 43-101.

These statements include proposed terms of the spinout transaction, proposed business plans for each of Usha and FMC, the listing of FMC's Shares, the anticipated benefits of the transaction, and disclosure of additional details concerning the transaction. These statements reflect management's current estimates, beliefs, intentions and expectations. They are not guarantees of future performance. Usha cautions that all forward-looking statements are inherently uncertain and that actual performance may be affected by many material factors, many of which are beyond their respective control. Such factors include, among other things: determination of acceptable terms for the proposed spinout transaction, risks and uncertainties relating to the receipt of approvals to proceed with and complete the transaction and the satisfaction of the conditions precedent to the completion of the transaction, unexpected tax consequences, the market valuing Usha and FMC in a manner not anticipated by management of the Company, the benefits of the spinout transaction not being realized or as anticipated, and each of Usha and FMC being unable to add additional properties to their respective portfolios. Accordingly, actual and future events, conditions and results may differ materially from the estimates, beliefs, intentions and expectations expressed or implied in the forward-looking information. Except as required under applicable securities legislation, the Company does not undertake to publicly update or revise forward-looking information.

The Company is presently an exploration stage company. Exploration is highly speculative in nature, involves many risks, requires substantial expenditures, and may not result in the discovery of mineral deposits that can be mined profitably. Furthermore, the Company currently has no reserves on any of its properties. As a result, there can be no assurance that such forward-looking statements will prove to be accurate, and actual results and future events could differ materially from those anticipated in such statements.

No Offer or Solicitation to Purchase Securities in the United States

After 11,000 US flights disrupted, FAA updates its computers

WASHINGTON D.C.: In a letter to lawmakers last week, the US Federal Aviation Administration (FAA) said it had put in ...

WASHINGTON D.C.: The Biden administration has stopped issuing export licenses to US companies seeking to ship most items to China's ...

Nearly a year in, the war in Ukraine has cost tens of thousands of lives and brought the world to ...

WASHINGTON D.C.: As part of a wider policy drive to increase competition in consumer markets, President Joe Biden has announced ...

OSLO, Norway: Ending a three-year run of profits as stock and bond prices were hit by rising inflation and Russia's ...