With wild card in sight, Mariners search for offense vs. Royals 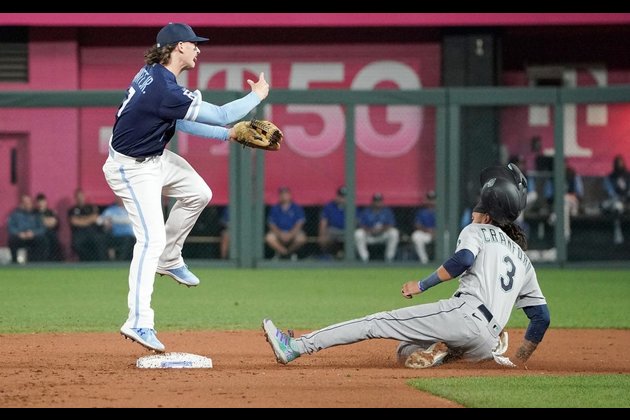 The Seattle Mariners picked a bad time to go into a collective slump. The Mariners are hanging on to the third and final wild-card spot in the American League, but they have little margin for error.

The Royals won their season-best fourth straight game Friday night behind a solid outing from Brady Singer. Singer allowed one run on five hits in seven innings. He struck out eight, helping him get out of constant struggles. He only had one clean inning.

The Mariners have lost seven of their past 10 games and scored one run in each of their past five losses. Seattle saw its lead on the final wild-card spot slip to three games ahead of the Baltimore Orioles.

The Mariners have not been to the playoffs since 2001, the longest postseason drought in North American major sports.

The Mariners had the leadoff runner on base in five of the seven innings against Singer, but the only run that scored came on a one-out home run by Cal Raleigh in the second inning. Seattle was 0-for-8 with runners in scoring position.

To make matters worse, the Mariners placed Rookie of the Year frontrunner Julio Rodriguez on the 10-day injured list with a lower back strain. He left Thursday's game against the A's with back discomfort. Manager Scott Servais had been hopeful that Rodriguez could avoid the injured list.

"You never know whenever any time a player goes on the IL, is he going to be ready to go when he's coming off there," Servais said. "After 10 days, all of our trainers and our medical people think he should be OK at that point. He does so much for our team, energy-wise, top of the lineup. He's kind of leading the charge."

With Gilbert on the mound, one run may be enough. He's allowed two runs in 23 innings combined in his past four starts. He's won three of those starts, with the lone loss a 2-0 setback against the San Diego Padres.

Bubic allowed five runs on seven hits in two innings against the Mariners in April, but he didn't take the loss. He's 1-0 with a 7.82 ERA in three career starts.

Maybe manager Mike Matheny ought to just go with his bullpen. Through 13 2/3 innings on the current homestand, the bullpen has not allowed a run.