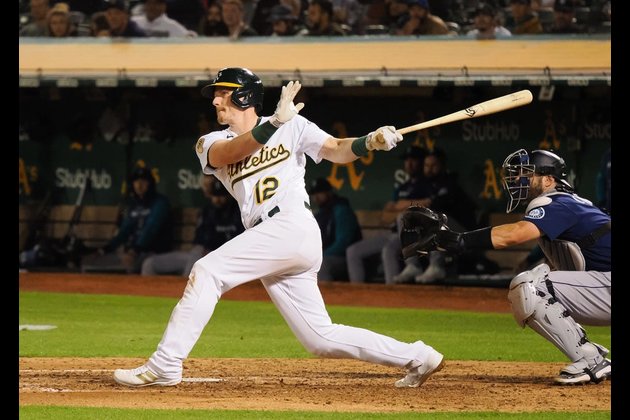 Left-hander JP Sears combined with four relievers on a one-hitter, Tony Kemp blasted a three-run, go-ahead home run, and the Oakland Athletics stalled the visiting Seattle Mariners' pursuit of an American League wild-card berth with a 4-1 victory in the opener of a three-game series Tuesday night.

The loss cost the Mariners (81-66) a chance to move ahead of the Tampa Bay Rays (82-66) in the three-team duel for wild-card position in the AL. The Mariners and Rays, who lost 5-0 to the Houston Astros, both lost a game to the Toronto Blue Jays (84-64), who moved two games up on the Rays and 2 1/2 ahead of the Mariners with an 18-11 triumph over the Philadelphia Phillies.

Seeking a second win in a row after three straight defeats, the Mariners went up 1-0 in the second inning after Carlos Santana led off with an infield hit. Turns out that was Seattle's final hit of the evening.

Santana managed to come around on an error and two walks by Sears, including one drawn by Sam Haggerty with the bases loaded.

Sears (6-2) avoided further damage by getting Julio Rodriguez to fly out to strand three baserunners. Then Sears retired nine of 10 batters in the next three innings, allowing just a walk. He completed his five innings with three walks and seven strikeouts.

The A's (54-94) rewarded Sears for his effort by taking the lead for good in the fifth, after Mariners starter Luis Castillo (7-6) had shut them out for four innings on two hits.

Conner Capel, making his A's debut, singled with one out in the fifth and Nick Allen drew a two-out walk, setting the stage for Kemp, whose three-run shot was his seventh homer of the season.

Oakland tacked on one more run, on doubles by Vimael Machin and Sean Murphy, to go up 4-1 before Castillo was pulled. He was charged with four runs on six hits in 4 2/3 innings. He walked two and struck out four.

Cyr walked two in the eighth but got a double-play grounder off the bat of Rodriguez in between to prevent the potential tying run from ever coming to the plate.

Acevedo's 1-2-3 ninth resulted in his third save of the season and gave Oakland its second win in the last three games.

Kemp and Allen finished with two hits apiece for the A's, who totaled seven.