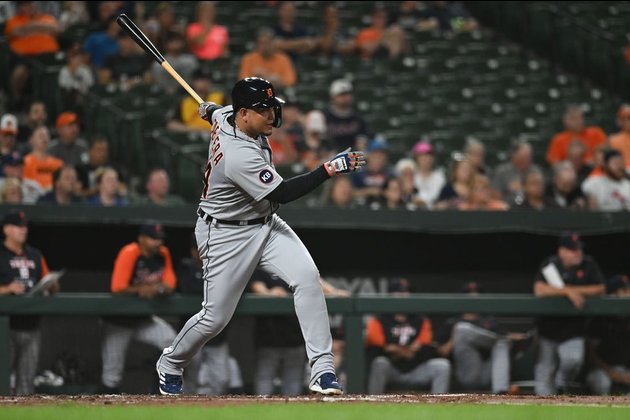 Tyler Alexander no-hit the Orioles through six innings as the visiting Detroit Tigers put a huge dent in Baltimore's playoff hopes with an 11-0 victory on Monday.

Alexander allowed just two walks in the first six innings. Ryan Mountcastle led off the bottom of the seven with a single and Anthony Santander followed with a single. But that was the extent of the threat, with a strikeout and a double play following.

Will Vest and Jose Cisnero each pitched an inning to complete the combined two-hitter.

The Orioles, who have lost nine of their last 14 games, used outfielder Ryan McKenna on the mound in the ninth inning. He gave up two runs.

Baltimore (76-70), a shutout victim for the third time this month, fell five games behind the Seattle Mariners in the race for the final American League wild-card spot.

The Tigers did most of their offensive damage in a five-run fourth inning. The first two runs scored on a bases-loaded walk drawn by Kreidler followed by a wild pitch. Akil Baddoo rapped a two-run single, and then Greene smashed the first of his two doubles to drive in one.

Miguel Cabrera, fresh off the injured list, knocked in the game's first run with a first-inning single. He had been sidelined since Sept. 3 due to a biceps ailment.

Cabrera wound up with two of Detroit's 14 hits. The Tigers didn't have a triple or home run despite matching their fourth-highest run total of the season.

Detroit hadn't won a game that lasted nine innings since Sept. 9, having posted a rain-shortened, eight-inning victory and a 10-inning triumph since then.

Mountcastle reached base three times because he drew two of Baltimore's four walks.