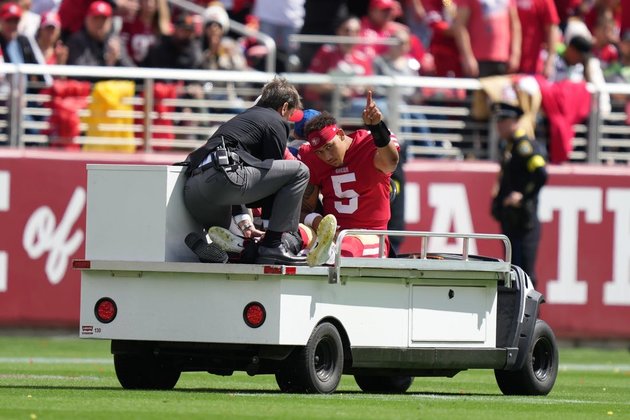 San Francisco 49ers quarterback Trey Lance broke his right ankle during Sunday's game against the Seattle Seahawks and will miss the remainder of the season.

The 49ers announced Monday that Lance underwent successful surgery to repair both a fibula fracture and a ligament disruption in the ankle. The team expects he will fully recover in time for the 2023 season.

Lance was injured late in the first quarter after keeping the ball on an option play. He was hit by Seattle's Cody Barton and his leg appeared to buckle under him as he fell to the ground.

Lance was carted off the field with an air cast on his lower right leg with 2:20 left in the quarter.

"It's tough. You feel for someone so bad," San Francisco coach Kyle Shanahan said. "It's a sad moment but you don't have time to sit there and think about it. You have to get right back into the game."

Shanahan said the offense calls on the mobile Lance to run with the ball.

"Anytime a guy gets hurt I wish I didn't call that," Shanahan said. "But no, that's something we were going to do."

Jimmy Garoppolo replaced Lance and completed 13 of 21 passes for 154 yards and one touchdown. He also rushed for a score.

Garoppolo completed his first four passes for 70 yards, capped off by a 38-yard touchdown pass to tight end Ross Dwelley.

"Just like riding a bike," Garoppolo said after the 27-7 victory. "It felt good to be back out there. I feel terrible for Trey. I've been on that side of it. This league is tough. Everyone has their share of injuries. That (stinks) for him."

Garoppolo underwent surgery on his throwing shoulder in the offseason and the 49ers attempted to trade him as they were committing to Lance as the starting quarterback.

San Francisco eventually kept Garoppolo on a reworked deal for 2022 only after it was unable to find a trade partner for the nine-year veteran.

Garoppolo led the 49ers to two NFC Championship Games over the past three seasons and the Super Bowl after the 2019 season.

"I'm comfortable here. The players, the scheme, the locker room. I'm familiar with it," Garoppolo said.

"I'm not saying I knew this was going to happen. But I was ready for this in case it did happen and I just wanted to take advantage of the opportunity."