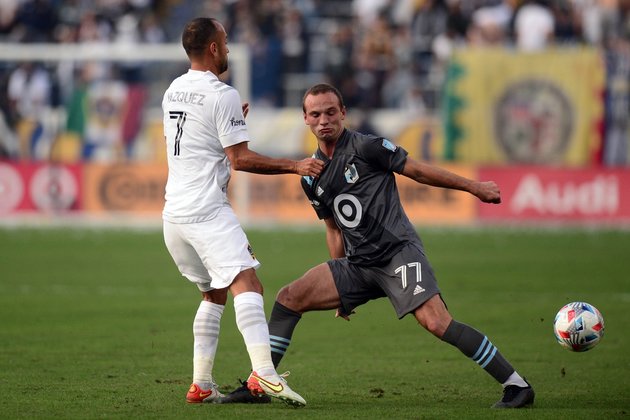 Minnesota United will try to snap a three-match losing streak on Wednesday night when they host the LA Galaxy in Saint Paul, Minn.

The Loons (4-5-2, 14 points), who started the MLS campaign without a loss in their first four games (2-0-2), have dropped to 10th place in the Western Conference. The losing streak is the team's longest since it began the 2021 season with four straight losses.

Minnesota's latest loss came on the road to its old nemesis, the Seattle Sounders, 3-1, on Sunday. That dropped the Loons to 0-8-0 all time at Lumen Field, including a bitter 3-2 loss in the 2020 Western Conference final when they blew a 2-0 lead.

Robin Lod scored his fourth goal of the season in the 34th minute to give Minnesota United a 1-0 lead only to see the Sounders rally for three second-half goals.

"Well, I'm sick to death of coming here and playing like we do," Loons coach Adrian Heath said.

"Playing as well as we did in the first half and then deciding that we are going to give them opportunities. ... The last thing we need to be doing is giving them opportunities by our stupidity and we continually keep doing it. We can't keep shooting ourselves in the foot.

"We've got another (game) Wednesday. I'm not going to keep putting up with it, I know that much."

The Galaxy (6-4-1, 19 points) come in off a 3-1 home loss to FC Dallas on Sunday but are in fourth place in the West. Goaltender Jonathan Bond is tied for second in the MLS with five shutouts while Javier "Chicharito" Hernandez leads the team with five goals.

Hernandez has failed to score in five straight games and Los Angeles has scored just 12 goals in 11 games this season. The Galaxy have scored one goal or less eight times.

"I think sometimes we get into these attacking positions and we take the easy way instead of putting balls into dangerous positions and going for it," LA head coach Greg Vanney told the Hermosa Beach (Calif.) Daily Breeze.

"I think there's some indecisiveness sometimes in the final action, timing isn't right, sometimes the choice in the final pass, the execution isn't great. Sometimes just the finish misses. We put the ball in a good place and we don't finish."

Birds of Prey (and the Fantabulous Emancipation of One Harley Quinn