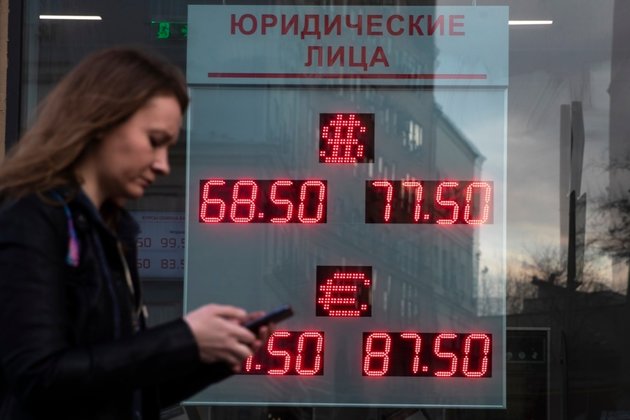 The Russian stock market took a dive Monday as war fears triggered a massive sell-off, with tens of billions of dollars wiped from the value of some of the country's leading businesses.

As concerns mount that President Vladimir Putin is poised to order an invasion of neighboring Ukraine, the ruble also hit a 14-month low, prompting the Central Bank to intervene by halting its regular purchases of foreign currency to help prop up the ruble.

"The Bank of Russia has decided not to purchase foreign currency on the domestic market," the bank said in a statement. "This decision was made in order to reduce the volatility of financial markets."

The bank regularly converts the proceeds of the country's oil and gas exports to avoid the ruble being impacted by swings in the value of global commodities.

The bank offered no details on when it would resume buying foreign currencies. The ruble was down 2.3% in early Monday trading but steadied after the bank's announcement.

Meanwhile, the Russian stock market plunged more than 10% on Monday but was 7% down when trading concluded. Since the start of the Russian military buildup on the borders of Ukraine in October, the market has lost more than a quarter of its value.

Anders Aslund is chairman of the International Advisory Council at the Center for Social and Economic Research, a policy group in Warsaw, Poland. Aslund predicts the market could fall much further if the geopolitical confrontation between Russia and Western powers over Ukraine worsens.

"So far, the Russian RTS stock index in USD has only fallen 27% from its high point on October 27 before Putin started threatening Ukraine," Aslund tweeted. "It has far more to fall. In 2008, it fell by 80% from May to October (Georgia war + global financial crisis)."

The London and Paris bourses were "slow to grasp why Sarajevo was different and unique," noted Ambrose Evans-Pritchard, international business editor of The Telegraph.

European investors and traders appeared Monday to take greater note of the geopolitical maneuverings, and markets nudged down lower on the news that Britain was joining the United States in withdrawing some diplomats and their families from the embassies in Kyiv, the Ukrainian capital.

The German and French stock markets were down about 2% in early trading, with analysts saying a New York Times report that U.S. President Joe Biden is considering deploying 5,000 troops to bolster the defenses of Ukraine's NATO neighbors contributed to jitters.

The London stock market also traded lower. Some analysts suggested the dips were as much the result of traders watching what the U.S. Federal Reserve might do about tightening monetary policy than the unfolding Ukraine crisis.

With the crisis deepening, the attention of the markets and Western policy makers is turning to the possible energy implications for Europe, which gets about half of its natural gas supplies from Russia. Fears have been mounting that the Kremlin might retaliate by stopping gas exports in the event the West imposes fresh sanctions on Russia. The result would be an energy shock for a continent that is already mired in an energy crunch and experiencing soaring prices.

US Orders Departure of Family Members of Ukraine Embassy Staff

"Should tensions between Russia and the Ukraine escalate, the initial uncertainty around its impact on gas flows would likely lead the market to once again add a significant risk premium to European gas prices,' Goldman Sachs analysts told clients.

Last week, the Reuters news agency reported the U.S. State Department has been putting together a global strategy to increase supplies of liquefied natural gas to Europe in the event a Russian invasion of Ukraine leads to gas shortages.

Amos Hochstein, senior adviser for energy security at the State Department, has been holding talks with several Middle East and North African countries, as well as companies in Europe, about how to boost gas supplies if Russia seeks to weaponize energy.

In London Monday, British Prime Minister Boris Johnson told reporters that the intelligence about Russian intentions was "gloomy" but added that a Russian invasion was not inevitable.

"The intelligence is very clear that there are 60 Russian battle groups on the borders of Ukraine. The plan for a lightning war that could take out Kyiv is one that everybody can see. We need to make it very clear to the Kremlin, to Russia, that that would be a disastrous step," Johnson said.

He added, "We also need to get a message (to Moscow) that invading Ukraine, from a Russian perspective, is going to be a painful, violent and bloody business. I think it's very important that people in Russia understand that this could be a new Chechnya."

He was referring to the brutal wars fought between Russia and Chechen rebels in the 1990s that left tens of thousands of people dead. Chechnya had waged wars of independence against Russia.

Speaking as Britain started to withdraw some embassy staff from Ukraine, Johnson said, "We do think it prudent to make some changes now."