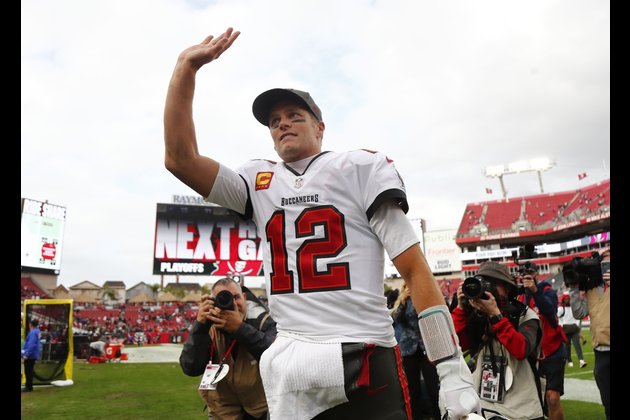 Retirement watch begins in Tampa Bay if Tom Brady and the Buccaneers are eliminated from the NFC playoffs on Sunday.

Brady, 44, is planning to take "a month or more" to decide whether to play in 2022, ESPN reported before the Buccaneers hosted the Los Angeles Rams in the divisional playoffs.

Brady led the Bucs to the Super Bowl last season and signed a restructured contract that includes next season.

The report indicates Brady and the Bucs are pleased with their partnership and mental and physical health are the forefront of the conversation with Brady and his family.

He said in the past he would like to play until age 45 and perhaps beyond, and performance has not been an issue.

Brady led the NFL in passing yards with a career-high 5,316 yards and tossed 43 touchdown passes despite a revolving door at the wide receiver and tight end positions.

The offseason could bring drama to the quarterback position for more than half of the NFL's 32 teams, led by prominent passers like Brady, Aaron Rodgers (Packers), Russell Wilson (Seahawks) and others.

Rodgers said he has a "tough decision" to make before the start of free agency about his future after Green Bay was eliminated from the postseason. Wilson first indicated 12 months ago that he wasn't happy in Seattle and wanted the franchise to address the offensive line.

After missing the playoffs this season, Wilson said he would explore his options, but is under contract with the team.

Should Brady retire, the Buccaneers would most likely be in the market for a quarterback, too. Blaine Gabbert and Kyle Trask, a second-round pick in 2021, are the team's backup quarterbacks.