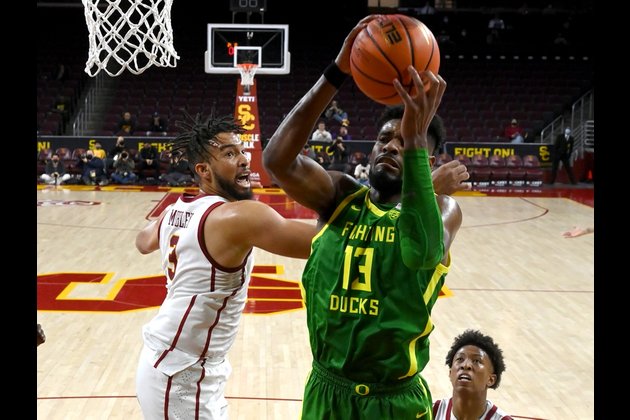 After an historic week in Southern California, Oregon was ready to keep rolling.

But the coronavirus pandemic again interrupted the Ducks.

Oregon's scheduled game Thursday against Washington State in Eugene, Ore., was postponed because of COVID-19 concerns within the Cougars' program. It was the fourth time the Ducks have had a game called off this season.

That meant Oregon (11-6 overall, 4-2 Pacific-12 Conference) had a couple of extra days to prepare for Sunday night's matchup with visiting Washington (9-7, 4-2).

"I think everybody is kind of adjusted," Ducks coach Dana Altman said after Thursday's postponement. "We were fired up about playing. You have a good weekend, you want to keep playing."

The Ducks became the first to accomplish the feat since Clemson in January of 1976, according to ESPN Stats Information.

"We needed a big week. Our guys knew that. I've been talking about a sense of urgency since the Baylor game (a 78-70 loss to the defending national champions on Dec. 18) and how we didn't have any more room for error," Altman said. "I haven't seen anything like it, but we needed something to jump start us."

The same can be said for the Huskies' Terrell Brown Jr., the conference's leading scorer, who has helped Washington to three straight wins. The Huskies defeated Oregon State 82-72 Thursday in Corvallis, Ore., without coach Mike Hopkins, who was placed in the COVID-19 protocol earlier in the day.

Brown scored 27 points on 11-for-18 shooting with six rebounds and five assists against the Beavers.

Assistant coach Will Conroy filled in for Hopkins on Thursday and is expected to do the same Sunday.