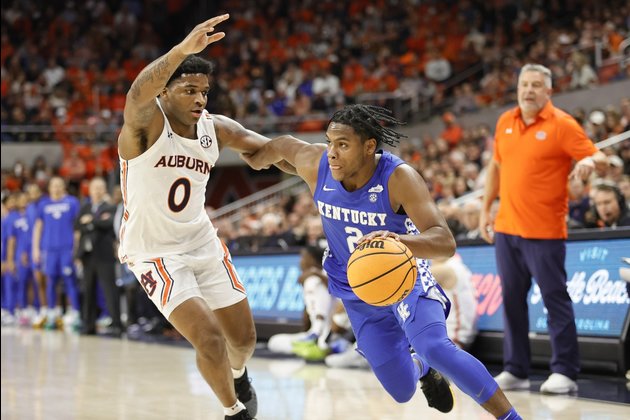 Walker Kessler rattled the rim with seven slam dunks on his way to scoring 19 points as he powered No. 2 Auburn to an 80-71 Southeast Conference victory Saturday afternoon at home over No. 12 Kentucky.

In winning its 15th straight before a raucous crowd, Auburn (18-1, 7-0) beat Kentucky at home for the third straight season and strengthened its hold on first place in the SEC.

After Auburn finished a close second to No. 1 Gonzaga in the rankings this week, the win could catapult the Tigers to the top spot for the first time in program history.

Kentucky (15-4, 5-2) had an early 10-point lead and held it into the second half. But the Wildcats lost starting guard TyTyWashington Jr. with an ankle injury midway through the first half.

Savhir Wheeler scored 17 points for Kentucky despite running into two bone-crushing screens by the 7-foot-1 Kessler, both of which forced him to the sidelines in the second half.

Kellan Grady also had 17 for the Wildcats while the nation's leading rebounder, Oscar Tshiebwe, added 16 points and 14 boards.

A 12-2 run early in the second half was decisive for Auburn. Johnson ignited it with a 3-pointer and a driving basket. Smith added five points in the spree that transformed a five-point deficit into a five-point lead at 45-40.

Auburn stretched its advantage to 12 points with 6:07 left as Johnson hit a 3-pointer and added three free throws.

Kentucky made a last-ditch run and pulled to within four points on a 3 by Grady with 3:20 left. But the Tigers remained true at the free-throw line on their way to making 24 of 29 (82.8%) for the game.

Auburn got off to a nervous start. During a 13-0 Kentucky run, the Tigers committed four turnovers that the Wildcats turned into fastbreak points. Grady triggered the run with a pair of free throws, a 3-pointer and a feed to Wheeler for a transition score. Wheeler added two more buckets in the run, which put Kentucky up 17-7.

But Kessler made four dunks in the final 8 minutes of the half as the Tigers whittled the deficit to 33-29.