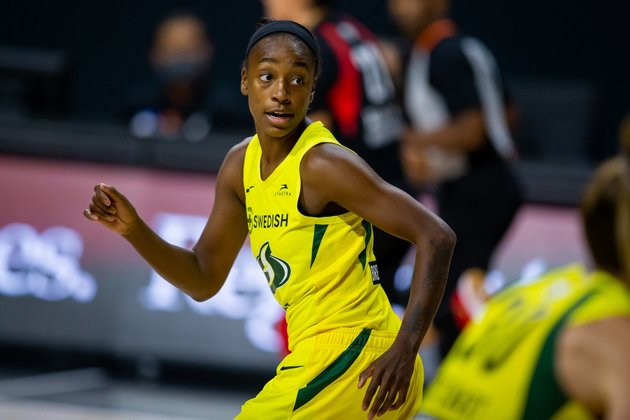 The Seattle Storm have used the WNBA's core designation to bring back three-time All-Star Jewell Loyd, according to multiple reports Friday.

If Loyd, 28, accepts Seattle's offer, she'll be signed to a one-year deal for the league's supermax salary of $228,094, and then be an unrestricted free agent again in 2023. If Loyd doesn't accept it, she can still negotiate a long-term contract with the Storm, or be traded. Under WNBA rules, teams retain exclusive negotiating rights with players that they core.

A former No. 1 overall draft pick in 2015 out of Notre Dame, Loyd has helped the Storm win WNBA championships in 2018 and 2020. She made her third All-Star appearance this past season while averaging career highs in several statistical categories.

Loyd was second on the team in scoring with 17.9 points per game. She also averaged four rebounds, 3.8 assists and 1.5 steals per game while shooting 42 percent from the floor and 37.6 percent from 3-point range.

With Loyd and fellow superstars Breanna Stewart and Sue Bird leading the way, the Storm finished the 2021 campaign with a 21-11 record and fell in the second round of the WNBA playoffs.

In 2021, Loyd was also part of the U.S. national team that won the gold at the Tokyo Olympics.

Loyd is the third WNBA player to be cored this offseason, joining Jonquel Jones of the Connecticut Sun and the Chicago Sky's Kahleah Copper.

Bird, 41, has already publicly announced that she's returning to Seattle this season, and the team is expected to sign Stewart to a long-term deal. WNBA teams can't officially sign free agents until Feb. 1.

RIO DE JANEIRO, Brazil: Due to the rising number of COVID-19 cases in Brazil and the spread of the Omicron ...

BERLIN, Germany: Vice Admiral Kay-Achim Schoenbach, head of the German Navy, resigned due to comments he made on Ukraine and ...

TOKYO, Japan: Toyota, the world's largest carmaker, has warned Japanese buyers of its new Land Cruiser SUV that they will ...

DALLAS, Texas: American Airlines has reported losses of $931 million in the fourth quarter of 2021. Additionally, officials have said ...

PARIS, France: European aircraft manufacturer Airbus has canceled a multi-billion dollar order by Qatar Airways for 50 of its single-aisle ...

The Docks of New York