Panthers have score to settle in rematch with Stars 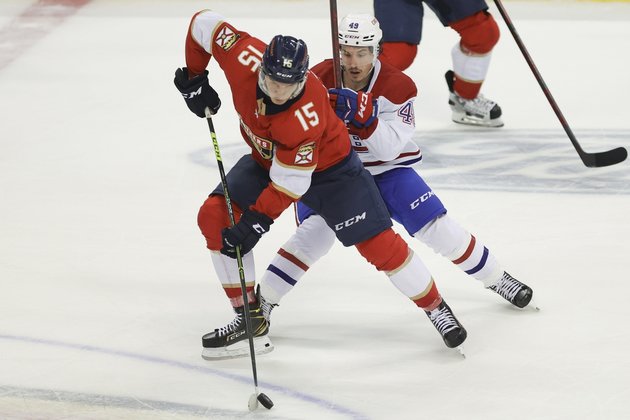 Anton Lundell's between-the-legs, back-to-the-net assist on Tuesday night was yet more evidence that the 20-year-old Florida Panthers rookie belongs in the NHL.

Lundell, a native of Finland who was chosen 12th overall in the 2020 NHL Draft, figures to be on the ice again on Friday night when hisPanthers play host to the Dallas Stars at Sunrise, Fla.

He entered Thursday first among NHL rookies in takeaways (36), tied for fifth in assists (13) and tied for sixth in points (20).

"(My confidence) this whole season has been very high," Lundell said. "But maybe the past couple of weeks it's been even higher."

Lundell, primarily a center, has played 32 of Florida's 36 games this season.

"I enjoy every game and every shift," he said. "I just try to do my best and show the fans what I can do."

Lundell is part of a deep roster for the Panthers, who have the best home record in the NHL (19-3-0).

The Panthers are on a seven-game points streak (6-0-1). The only blemish during that span was a wild 6-5 shootout loss to the host Stars on Jan. 6.

Jonathan Huberdeau, who leads the Panthers in assists (34) and points (47), scored with 29 seconds remaining to send the game into extra time.

But Dallas' Joe Pavelski and Jason Robertson beat goalie Sergei Bobrovsky in the shootout, and Huberdeau and Lundell failed to get the puck past Braden Holtby, giving the Stars the victory.

Dallas coach Rick Bowness announced Wednesday that Holtby and forwards Denis Giranov and Alexander Radulov have entered COVID protocols. That robs the Stars of their top goalie and two of their top 10 scorers in Gurianov (14 points) and Radulov (12).

Still, the Stars have won five of their past six games, including Wednesday's 5-2 victory over the visiting Seattle Kraken. Pavelski had his fingerprints on all five goals -- two tallies and three assists -- and Robertson extended his point streak to eight games.

Robertson has five goals and seven assists during that streak.

For Pavelski, it was his first career five-point game. In his past 16 games, he has scored at least two goals in four contests. He is also the first NHL player in 10 years to record five points or more in a game at age 37 or older.

"He has natural offensive instincts you can't teach," Bowness said of Pavelski. "He has great poise around the net and an ability to sniff out loose pucks. Goal scorers know where to put the puck."

Florida has its own standouts, including captain Aleksander Barkov, who has three short-handed goals in his past six games.

Florida's Aaron Ekblad this week became the third NHL defenseman to reach 10 goals for the 2021-2022 season. He entered play Thursday with 32 points, tied for fifth among NHL defensemen.

"It's unbelievable to be on a team like this," Ekblad said. "This is a special team."

RIO DE JANEIRO, Brazil: Due to the rising number of COVID-19 cases in Brazil and the spread of the Omicron ...

BERLIN, Germany: Vice Admiral Kay-Achim Schoenbach, head of the German Navy, resigned due to comments he made on Ukraine and ...

TOKYO, Japan: Toyota, the world's largest carmaker, has warned Japanese buyers of its new Land Cruiser SUV that they will ...

DALLAS, Texas: American Airlines has reported losses of $931 million in the fourth quarter of 2021. Additionally, officials have said ...

PARIS, France: European aircraft manufacturer Airbus has canceled a multi-billion dollar order by Qatar Airways for 50 of its single-aisle ...

The Docks of New York