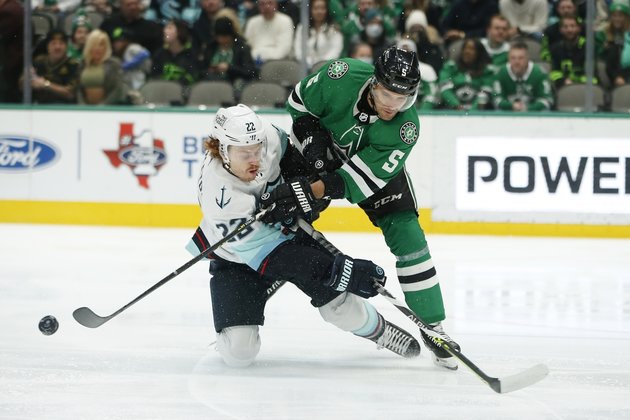 Joe Pavelski had a hand in all five goals - scoring twice and adding three assists - as the Dallas Stars defeated the visiting Seattle Kraken 5-2 Wednesday night.

Roope Hintz had a goal and two assists and Jason Robertson added a goal and an assist for the Stars, who won for the fifth time in their past six games. Jani Hakanpaa tallied on an empty-netter with 1:42 remaining and goaltender Jake Oettinger made 23 saves, stopping all 14 shots he faced in the third period.

Jared McCann had a goal and an assist and Calle Jarnkrok also scored for the expansion Kraken, who have lost seven games in a row (0-6-1). Philipp Grubauer stopped 20 of 24 shots.

The Stars, who allowed two goals in the final minute of a 2-1 loss Sunday in St. Louis, seemed ready from the start against Seattle.

Dallas took the lead just 50 seconds into the game as Jason Robertson's shot from the left faceoff dot pinballed off the skates of Hintz and Kraken defenseman Mark Giordano and into the net.

The Kraken tied it at 1-1 with a power-play goal at 8:25 of the first, with Jarnkrok beating Oettinger with a one-timer from the slot.

Pavelski gave the Stars a 2-1 lead at 11:00 of the period, as Miro Heiskanen's shot from the blue line went wide of the goal but took a hard carom off the end boards and came right back to Pavelski at the left post and he tapped the puck into the open side of the net.

The Stars extended the lead to 3-1 at 13:01 of the period on Robertson's power-play tally, taking a pass from Hintz and beating Grubauer with a backhander from close range.

Seattle pulled within a goal as Jordan Eberle faked a wraparound attempt and fed McCann at the top of the crease for a one-timer at 5:38 of the second.

The Stars restored their two-goal edge at 18:37 of the second as Esa Lindell stole a clearance attempt along the left-wing boards and fired a cross-ice pass to Pavelski at the far post for a tap in.

U.S. unlikely to organize evacuations for Americans in Ukraine

US citizens in Ukraine advised to board commercial flights in case push comes to shove A spokesperson for the US ...

LONDON, England: UK Prime Minister Boris Johnson has said that since infections are leveling off in most parts of the ...

MARION COUNTY, Tennessee: Following a nearly 10-year court battle, after being served commercial-grade bleach instead of water at a Cracker ...

PARIS, France - TotalEnergies, a French energy behemoth, has asked the US and French governments to approve targeted sanctions against ...