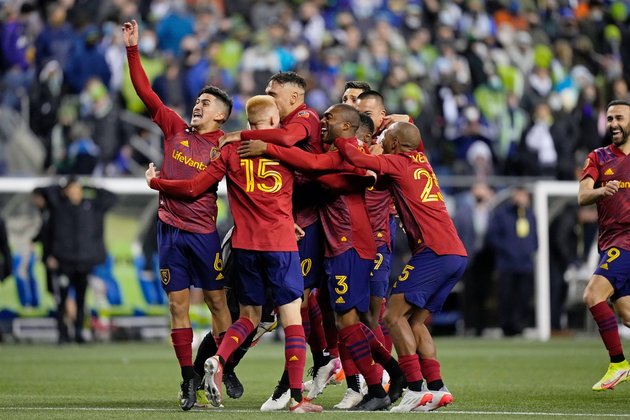 Justen Glad scored the deciding goal in the sixth round of a penalty-kick shootout on Tuesday as Real Salt Lake upset the host Seattle Sounders in the first round of Major League Soccer's Western Conference playoffs after a scoreless draw.

Seventh-seeded RSL, which was outshot 21-0 through regulation and 30 minutes of extra time, will play at Sporting Kansas City in the conference semifinals on Sunday.

Both teams made each of their first five attempts in the shootout, sending it to an extra round.

RSL goalkeeper David Ochoa made a diving stop against Kelyn Rowe on the sixth Seattle attempt before Glad stepped up to the penalty spot. Glad's shot, toward the lower left corner of the net, went off the hands of Seattle goalie Stefan Frei and then off the post before the ball rolled across the front of the goalmouth and just inside the right post.

Frei made a save against Pablo Ruiz in the second round of the shootout, but the goalie was ruled to have come off his line before the kick was made. Ruiz got a retake and put it into the lower right corner of the net.

Ochoa made three saves through the end of overtime.

Seattle's Raul Ruidiaz, who set a franchise record with 17 goals in the regular season, came off the bench at halftime after being out since Nov. 1 with a left hamstring strain. Ruidiaz came closest to scoring in regulation, putting a 25-yard volley off the crossbar in the 73rd minute.

The first shot on goal was a 20-yarder by Nicolas Benezet in the 47th minute, which was easily stopped by Ochoa.

Yeimar Gomez Andrade took a header from the top of the 6-yard box off free kick from Joao Paulo in the 78th minute that was saved down low by Ochoa.

Cristian Roldan's 12-yard header off a free kick from Nicolas Lodeiro in the 113th minute went right at Ochoa.

WASHINGTON, D.C.: After officials in Washington D.C. admitted they could not explain the phenomena of UFO sightings, the U.S. government ...

After decades of work, Egypt to open 3,000-year-old Avenue of Sphinxes

CAIRO, Egypt: Egypt opened its 3,000-year-old Avenue of Sphinxes to the public this week, in a swanky ceremony, after over ...

SINGAPORE: Three months after Cambodia rolled out COVID-19 vaccines, just 11 percent of its population had received at least one ...

SEATTLE, Washington: In early November, the Olive Bay was docked in the port of Everett, Washington. Below its decks was ...

WASHINGTON D.C.: With agricultural costs being driven to new highs due to a shortfall of nitrogen fertilizer worldwide, farming communities ...

NEW DELHI, India: India will introduce a bill during the winter session of Parliament that could block the use of ...

PARIS, France: In protesting the UK's refusal to grant more licenses to fish in British waters, French fishermen said this ...

WASHINGTON D.C.: To encourage a drop in sky-high gasoline prices, President Biden said the Department of Energy will release 50 ...