TORONTO, ON / ACCESSWIRE / September 22, 2021 / NEWPORT GOLD INC. (OTC PINKS:NWPG) (the 'company') is pleased to announce the following update on the company's business and corporate objectives for the remainder of 2021 and beyond. The company is focussed on advancing an exploration and drilling program on its wholly owned Manitou mining claim, located in the Burnt Basin property in the Greenwood Mining division in British Columbia. The company suspended planned exploration work in 2020 due to Covid-19 related concerns.

The company has engaged Apex Geoscience to carry out a sampling and trenching program on the Gold Knoll showings which consist of two quartz veins which have previously assayed 43.07g/ton gold and 42.78 g/ton gold which is open in all directions. The Gold Knoll showing was first discovered late in 2007, in follow-up to a gold soil geochemical anomaly. Several small historic hand trenches and open cuts explore centimetre-scale quartz veins within Josh Creek micro diorite on the knoll, north east of the airborne conductors and northwest of the Upper Eva Bell showing. The former sample also carried 204g/t Ag and about 1%Pb with minor Zn while the latter sample carried 46g/t Ag and .38%Cu. Of all the samples taken in the past by the company this was the first time high gold values have been found with this amount of grade wise base metals. The company is also planning a 60 meter drill hole to test the showings and examine the potential of the Gold Knoll property. 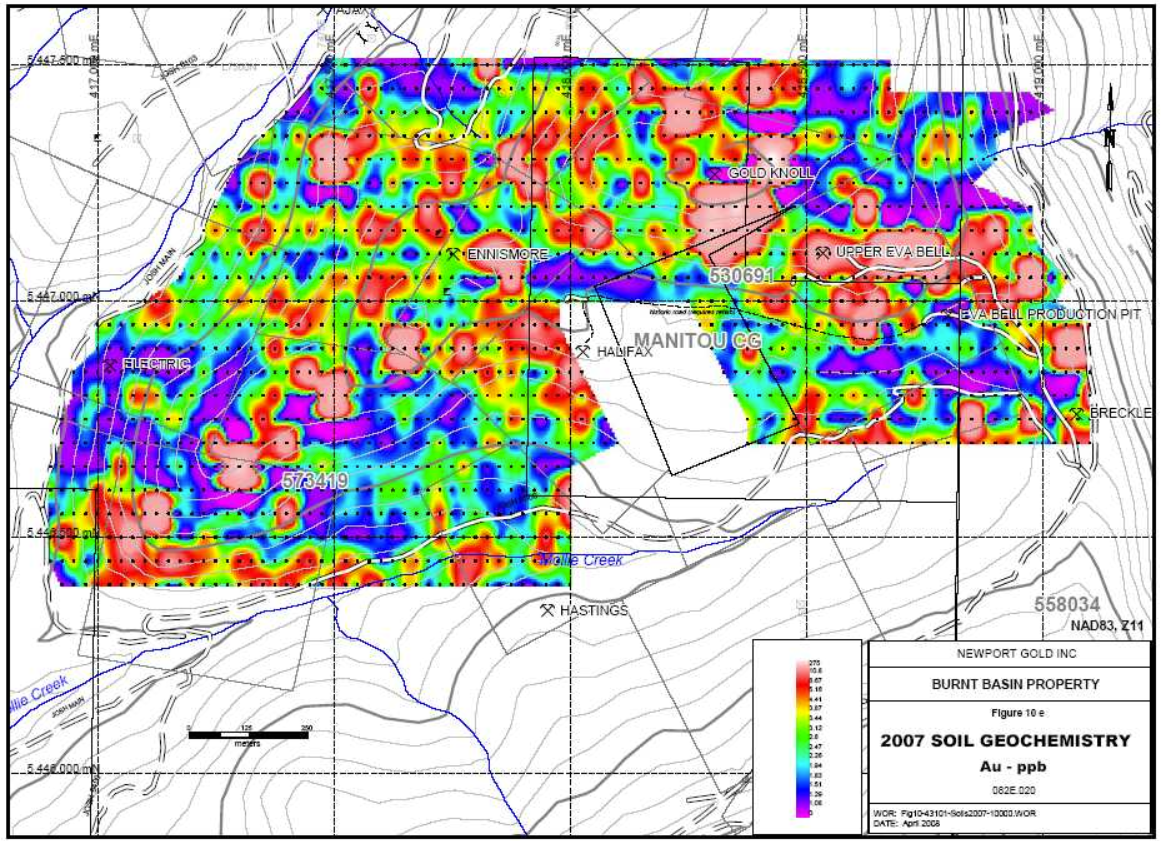 The company is also planning to test two flat lying conductors located at a depth of 50 and 300 feet below surface on its Manitou claim. The two flatish conductors were a result of conducting an airborne survey over the company's former property and retaining the only claim hosting the conductors.

The two main targets are the horizontal anomalies which cover some if not all the mineralization described below in 1927 at a 60 foot depth, and another deeper zone at about 300 feet. The latter zone is presumed to be another mantos zone similar to what was found at the Gilman mine in Colorado which hosts many mantos zones.

In 1927 the Halifax claims were worked on at a depth of 60 feet and the mineralized area was said to occur entirely within limestone and to extend for a length of at least 500 feet. The upper zone is described as being galena, sphalerite and pyrite in a quartz gangue, while the lower zone is said to contain pyrite and chalcopyrite. Development work included open cuts and a tunnel located below the outcrop. A sample of the ore extracted assayed 20.5% zn, 17.7% pb and 10.8 oz/ton ag.

Dr. Donald kohls a former director of the company and formerly in charge of Goldfields Mining exploration program, which resulted in the discovery of several multi million ounce gold mines, felt strongly that the airborne anomalies represented manto deposits. The latter conclusion was partly due to the presence in several areas on surface of high grade values of both copper and silver which make up the pipe portion of these deposits, he had studied the 11.7 million ton Gilman deposit in Colorado, a classic mantos deposit. This interpretation explains not only the host rocks but the presence of the very high values of copper and silver in the immediate area.

Dr T. Hoy, a renowned expert in base metal deposits has visited the property and also considered it mantos style mineralization. He thought the presence of high grade values of copper and silver in the area east of Halifax mine was perhaps the keel zone of a mantos deposit.

Dr. Hoy thought the high grade gold system at the Molly Gibson, just south of the company's Manitou property represented the deeper part of the base metal system on the Manitou property and the Gold knoll showing would be proof of his geologic analysis. He thought that the gold would be present at depth with and/or below the base metal mineralization.

The company is actively monitoring the forest fires in BC to determine any potential impact on its planned exploration work.

Newport Gold is a Nevada chartered company (incorporated July 16, 2003) involved in mining exploration and potential development of mineral properties in Canada. Newport has also made investments in various mining processing technologies and continues to review the status of those investments and intends to provide an update in the near future.

Washington: states can order Covid vaccines for kids over 5 years

WASHINGTON D.C.: US health officials have notified states that they can now order doses of COVID-19 vaccines for younger children, ...

INTERNATIONAL SPACE STATION: The International Space Station (ISS) unexpectedly tilted after a faulty test firing of thrusters on a Russian ...

WASHINGTON D.C.: Before granting approval for use in young people, the Food and Drug Administration (FDA) is studying whether Moderna's ...

In Sudan, thousands call for return of military rule

KHARTOUM, Sudan: On Saturday, thousands of pro-military protesters staged a rally in central Khartoum demanding that the government of prime ...

BEIJING, China: Three astronauts from China have arrived at the country's new space station, a major achievement for a national ...

NEW YORK, New York - U.S. stocks were mixed on Thursday with the technology sector forging ahead, while industrials lagged."For ...

BRUSSELS, Belgium: European Union Labor Commissioner Nicolas Schmit has warned that a sharp rise in energy prices could cause greater ...

SYDNEY, NSW, Australia - Stocks in Asia were flat to lower on Thursday as renewed uncertainty about the future of ...

COVID-19 and the unprecedented economic crisis it caused made 2020 one of the most economically challenging years for communities across ...

NEW YORK CITY, New York: Amazon has announced that it will hire 150,000 temporary workers in the United States for ...

Letter From an Unknown Woman