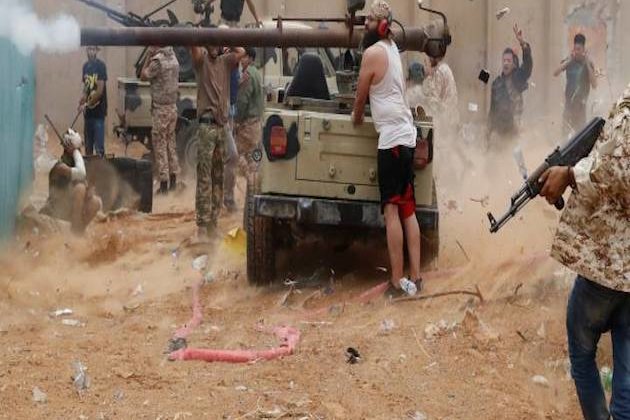 It's been eight years since the NATO-led military intervention in Libya. Many analysts consider the action a crucial step forward in protecting civilians from looming atrocity. But today, Libya stands further from peace than ever.

Since April 2019, battles between the UN-sponsored Government of National Accord (GNA) and General Khalifa Haftar's Libyan National Army have raged in Tripoli. By the end of July, an estimated 1,100 people had been killed and a further 104,000 displaced.

In early July, an airstrike on Tajoura migrant detention centre near the Libyan capital Tripoli reportedly killed more than fifty civilians and injured 130. When a strike landed close to the centre just six weeks before, Amnesty International warned of the dangers faced by detainees. Their warnings were ignored and 610 migrants were trapped in Tajoura when a bomb struck. According to one doctor working for Medecins Sans Frontieres, there were "bodies everywhere, and body parts sticking out from under the rubble".

As our new book chronicles, today's battle for Tripoli is the latest in a long line of horrors. Post-intervention Libya has faced political and economic collapse, with 7,578 violent deaths recorded between 2012 and 2018. Hundreds of thousands of people have been displaced and weapons have spread across the region.

While spectacular acts of violence dominate headlines, the horrors facing civilians in Libya are routine and every day. Migrants are left to die from treatable illness in awful detention centres. One migrant in Libya, writing anonymously for The Independent, said: "We panic every day, we are dying slowly, because of too much depression and starvation."

Back in late November 2017, the European Union's migration commissioner, Dimitris Avramopoulos, said he was, "conscious of the appalling and degrading conditions in which some migrants are held in Libya". And yet, extreme human rights abuses are still being actively enabled by European policies.

Humanitarian rescue missions have been criminalised, leaving people to drown in the Mediterranean. Migrants captured at sea are sent back to detention centres, including 90 who were forced to return to Tajoura mere days after the airstrike.

Ghassam Salame, special representative of the UN Secretary-General and head of the UN Support Mission in Libya, reports that "external support has been instrumental in the intensification of airstrikes".

The UN is currently investigating allegations that the United Arab Emirates has supplied Haftar with weapons in violation of a UN arms embargo, and French weapons have been found at a Haftar base. Meanwhile, Turkey is providing weapons to fighters from the GNA.

The G7 and the UN have condemned the violence in Libya. In practice, however, the actions of some of their members fuel the killing and prevent co-ordinated diplomatic action.

It's often argued that Libya shows the need for more robust post-intervention planning of humanitarian military interventions. This is misleading. Instead, the situation highlights the need for new thinking on civilian protection.

The question of intervention usually emerges at that dramatic moment when civilians are at risk of extreme violence. Often brushed aside is the every day atrocity of the kind seen in Libya today: civilians at risk of starvation, death through treatable illness and killing at the hands of callous policies. This is not only an atrocity in its own right. As our research shows, it also creates an ideal habitat for mass atrocity crimes including genocide and ethnic cleansing. Instead of calling for military action when atrocity crimes occur, our focus should shift towards addressing the injustices that help create them.

Also forgotten is the role the international community plays in fuelling conflict through stoking division and selling arms. France provided Rwanda with weapons used to commit genocide in 1994. Claims that France also provided military training for perpetrators are under investigation by a French commission of experts. US and UK arms are being used against Yemeni civilians. Moreover, members of the international community have supported different sides in the Syrian civil war.

Read more: Why British arms sales to Saudi Arabia ruled unlawful – what this means for the future

Events in Libya show what can happen when international players claim to do good things through military action. To prevent future atrocities, the international community must recognise the absurdity of dropping bombs to protect people while also detaining migrants in the centre of war zones, dealing arms, and preventing rescue missions.

Military intervention does not protect civilians. We should call on the international community to change their callous policies that kill every day. We should demand that they stop fuelling atrocity crimes. And we should support non-violent forms of protection such as unarmed civilian peacekeeping, which have proven effective in Colombia, South Sudan, Kosovo and Sri Lanka.

To support military intervention gives further licence to the militarism of those already fanning the flames of atrocity. This will only result in more of the violence seen in Libya today.

WASHINGTON, DC The man who struck down three U.S. Capitol Police officers with a fire extinguisher during last week's storming ...

WASHINGTON, DC - A Utah man has been charged with breaking into the U.S. Capitol last week wearing a bullet-proof ...

Provided by Xinhua | &A 6.2-magnitude earthquake has killed 35 people in Indonesia, injuring 637 and displacing around 15,000 people.JAKARTA, ...

Four dead, many injured after UN peacekeepers ambushed in Mali

Five United Nations peacekeepers lost their lives on Wednesday, 4 in Mali and one in the Central African Republic. 4 ...

BEIJING, China - A team of 10 World Health Organisation (WHO) experts arrived in Wuhan on Thursday to investigate the ...

WASHINGTON, DC - U.S. President Donald Trump on Wednesday became the second U.S. president in history to be impeached.Democrats were ...

NEW YORK, New York - Wall Street ended the week on a negative note Friday with all the major indices ...

New and used car sales in Ireland plunged in 2020