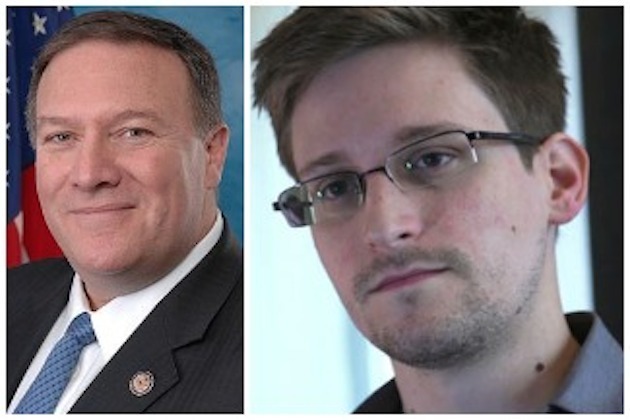 WASHINGTON, DC - A member of the Tea party, who is a life member of the National Rifle Association, and who has called for the death penalty for whistleblower Edward Snowden, has been nominated to be the Director of the CIA.

President-elect Donald Trump has nominated Mike Pompeo, who has spent the last five years in the House of Representatives for the Kansas 4th congressional district, to run the CIA. He also also annointed retired General Mike Flynn has his national security adviser.

Born in California, a little over a month after the JFK assassination, CIA Director-designate Mike Pompeo is now 52. On Friday he confirmed he had been offered the position of CIA Director and that he had accepted the nomination. Pompeo met earlier this week with the President-elect's transition team in New York's Trump Tower.

Snowden, a former National Security Agency contractor, is currently in Moscow after fleeing the United States following his leaking of multiple reports on U.S. intelligence gathering to major international newspapers.

"He should be brought back from Russia and given due process, and I think the proper outcome would be that he would be given a death sentence," Pompeo said in the C-SPAN interview on November 2nd.

"Having put friends of mine, friends of yours who serve in the military today an enormous risk because of the information he stole and then released to foreign powers," he added.

Interestingly Trump tapped Pompeo before news leaked that he was going to nominate Sen. Jeff Sessions to be his Attorney General. Normally the CIA director reports to the Attorney General, and would in usual circumstances be appointed by him (or her). Trump however has made his own choice.

Pompeo has been on Snowden's back since 2014 when he wrote to organisers of the SXSW Conference which invited Snowden to address attendees by a video presentation.

Pompeo had tried unsuccessfully to get the organisers to withdraw the invitation. He said he was "deeply troubled" by the giving of a platform to someone "whose only apparent qualification is his willingness to steal from his own government." He said this would promote "the very lawlessness he exhibited."

"Mr. Snowden's continued pursuit of the limelight has little to do with online privacy and everything to do with ensuring that he stays in the good graces of his new home nation," he wrote. "Once he stops doing interviews attacking America's ability to collect intelligence lawfully, he stops being useful to the Kremlin."

He is a supporter of aggressive interrogation techniques, including waterboarding. He is a fan of the NSA surveillance program which was curtailed after Sonowden's revelations. Pompeo wants is resumed, and expanded.

He opposes the Affordable Care Act. He  opposes the closing of the Guantanamo Bay detention center.Following a visit to the prison in 2013 during a hunger strike being staged by inmates, he famously said:  "It looked to me like a lot of them had put on weight."

Pompeo is a lifetime member of the National Rifle Association, which has endorsed him.

He supported the Federal Government shutdown in 2013, blaming President Obama. He said he believed the shutdown was necessary to avoid an  "American financial collapse 10 years from now." In January 2014, Pompeo voted against a 2-year budget deal drafted by Paul Ryan that would avert any government shutdown until 2015 and cut deficits by $23 billion.

According to Wikipedia, Pompeo opposes the regulation of greenhouse gas emissions, and supports eliminating the Environmental Protection Agency's greenhouse gas registry program. He signed the Americans for Prosperity's No Climate Tax pledge. He has called for the elimination of Wind power production tax credits, calling them an "enormous government handout".

In a 2013 speech on the House floor, Pompeo said Muslim leaders who fail to denounce acts of terrorism done in the name of Islam are "potentially complicit" in the attacks. The Council on American-Islamic Relations called on Pompeo to revise his remarks, calling them "false and irresponsible".

Pompeo is strongly anti-abortion. He believes that abortion should be permitted in cases when the mother's life is at risk, but should be illegal in cases of rape and incest.

He is opposed to the deal with Iran and has vowed to work towards having it overturned..

Pompeo attended the U.S. Military Academy at West Point, graduating first in his class in 1986. He served as a cavalry officer in the U.S. Army, leading troops as they patrolled the Iron Curtain before the fall of the Berlin Wall. After leaving active duty, Pompeo earned a law degree from Harvard Law School and served as an editor of the Harvard Law Review.

After practicing law for three years, he returned to his mother's family roots in South Central Kansas and founded Thayer Aerospace along with three partners. In less than a decade, the aerospace manufacturing company grew to more than 400 Kansas employees. Following a decade as CEO of Thayer Aerospace, Pompeo sold his interest in the company and soon after became President of Sentry International, an oilfield manufacturing, distribution and service company.

In Congress, he focused on freeing private enterprise to succeed. He launched a national effort, called America Flies, aimed squarely at promoting the aviation industry. Pompeo has also been at the center of the debates regarding American energy production, halting regulatory overreach, particularly with respect to production agriculture, and reducing the imposition of burdens on entrepreneurs and small business leaders.

He is regarded as a conservative leader on national security issues and the welfare of our soldiers, sailors, airmen and Marines. H

With his wife Susan, Pompeo has been an active leader in the community. They taught 5th grade Sunday school together at their church and are both involved in many activities in support of Susan's alma mater, Wichita State University. They have one son Nick, who now lives and works in New York City.

Trump running into legal hurdles over attempt to ban TikTok

WASHINGTON, DC, September 25 (ANI/Sputnik): A U.S. federal judge has ordered the Trump administration to postpone its ban on downloads ...

Asteroid size of a bus comes close to Earth

Scientists at the U.S. space agency NASA say a small asteroid - roughly the size of a bus - passed ...

One of New York's finest accused of spying for China

Why Biden should not pick Michele Flournoy as defense secretary

If the Democrats manage to push Joe Biden over the finish line in November's election, he will find himself presiding ...

Life could be habitable underground on Mars, scientsts say

MASSACHUSETTS, September 23 (ANI): Recent science missions and results are bringing the search for a life closer to home, and ...

SYDNEY, NSW, Australia - Stocks in Asia were generally stronger on Friday, at least in Japan and Australia."What we've seen ...

UK restaurants and pubs brace for fallout from new restrictions

An employee arranges products to be exported to Russia at a food processing company in Suifenhe, northeast China's Heilongjiang Province, ...