New long range version of A321neo will compete with Boeing 757 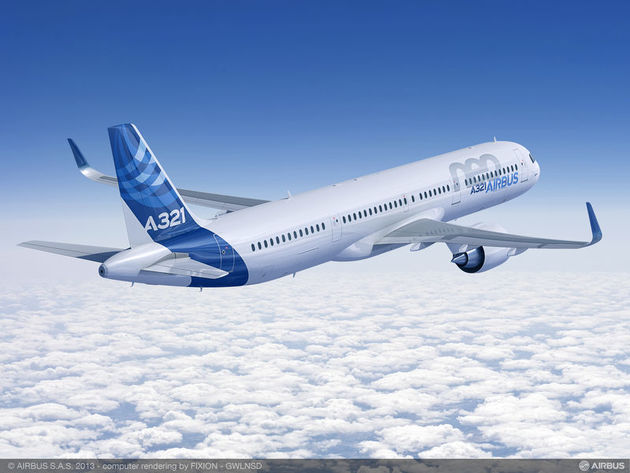 TOULOUSE, France - Airbus has announced that it has begun offering airlines a long-range version of its A321neo airliner, which is intended to replace Boeing's 757, a long-range single-aisle passenger jet that is no longer in production.

"The long-range version of the A321neo will be the ideal 757 replacement with true transatlantic range, 25% lower fuel burn and true long-range comfort," an Airbus representative told the media this week.

The long range version of the A321neo, fitted with an extra fuel tank, will fill a gap in the product line for a single-aisle plane that can fly farther than Boeing's 737 or the Airbus A320.

The niche has long been seen as one that Boeing might also seek to fill.

However, Airbus says the A321neo's 18-inch-wide seats and room for lie-flat beds in business class would give it a competitive edge.

The Toulouse, France-based aviation giant said it foresees the airliner entering service in 2019.

"We are actively discussing this A321neo development with customers," Airbus said. "The increased 97-tonne maximum take-off weight and additional fuel capacity will give the A321neo a significant range increase overtaking the 757 currently operating on the transatlantic."

The jetliner will carry additional fuel tanks, but normal A321neos cannot be retrofitted to extend their range.

SACRAMENTO, California: California ended the majority of its Covid restrictions this week, with a few exceptions, such as wearing masks ...

China sends 28 military aircraft across Taiwan in show of force

TAIPEI, Taiwan: Responding to criticism during the G7 summit of Chinese aggression, 28 Chinese air force aircraft, including fighters and ...

BOSTON, Massachusetts: A 37-year old admissions ticket was honored by a Boston museum, with the bearer of the ticket being ...

WASHINGTON D.C.: In defiance of China, a U.S. aircraft carrier group is sailing through the South China Sea, which China ...

MUSCAT, Oman: A resurgence in Covid infections in the Gulf state of Oman has resulted in an acute shortage of ...

NEW DELHI, India: India has reported a continuing decline in Covid infections, including a staggering 31 percent drop in the ...

Land Rover to test hydrogen as alternative to electric batteries

U.S. dollar in demand in Asia, stocks and bonds on the nose

SYDNEY, NSW, Australia - Stocks in Asia were little moved on Friday as bond yields rose and the U.S. along ...

BERLIN, Germany: Germany will end rules in June that required companies to allow employees to work from home during the ...

RICHMOND, Virginia - As negotiations in Congress continue on a federal infrastructure package, a report out today predicts the American ...